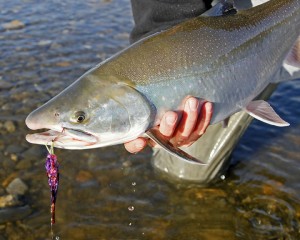 My hands were frigid in the icy Alaskan river, and things weren’t looking good for this finned, anadramous, Arctic char. Several minutes ago, swinging a 7-weight spey rod, heavy tip, and weighted flash fly, I dredged up the chrome toad, fifteen plus pounds, and fresh from the salt. After a fairly short fight, five minutes max, I carefully put the meat to him in hopes of a quick landing and release. Sometimes that doesn’t work out, but I was hoping this time it would, as I attempted to revive him. 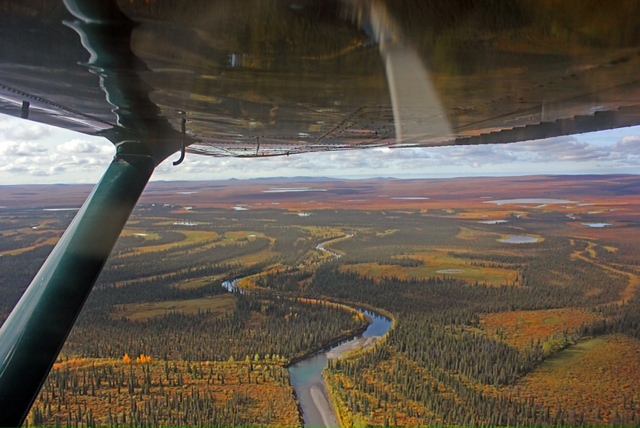 We (my dad, Jesse, and myself) were fishing a river north of the Arctic Circle, in Northwestern Alaska, for Arctic char last September. My parents neighbor, who is a recently retired Alaska Department of Fish & Game fisheries biologist, spoke to me about this particular river and its run of the spotted sea-run fish. He said that years ago, while doing an aerial fish count for these char, at the height of their run, he counted 93,000 fish. Then, after a radio-tagging survey, it was determined that a good portion of them travel to Kamchatka for a couple years, drink plenty of Stoli with our Eastern neighbors, and get huge before returning to this river. The minimal amount of pressure, their size, the overall quantity of the fish, and their willingness to bite…anything, smelled like a recipe for several exciting days. 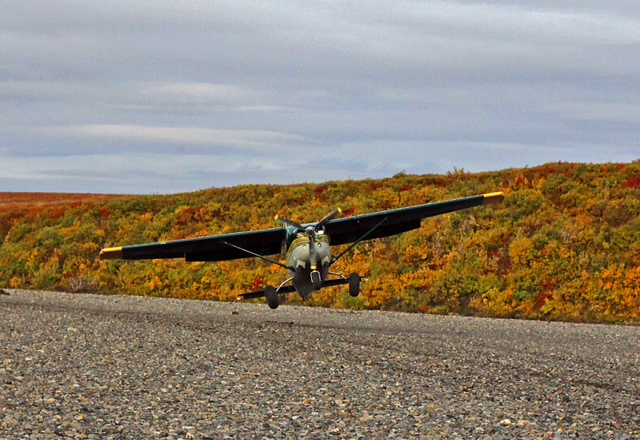 Nobody said getting into or out of Alaska is easy.

There are no roads to this river, or put-ins for boats, the only access being by by bush plane out of the village of Kotzebue. Kotzebue is similarly isolated, accesible only by boat or plane, conveniently located on a spit of land that pierces the side of the Chukchi Sea. The surrounding scenery is starkly barren, filled with friendly grizzlies, and hauntingly beautiful, Alaska’s Tierra del Kotz. Luckily for us, our friends own and operate an air taxi 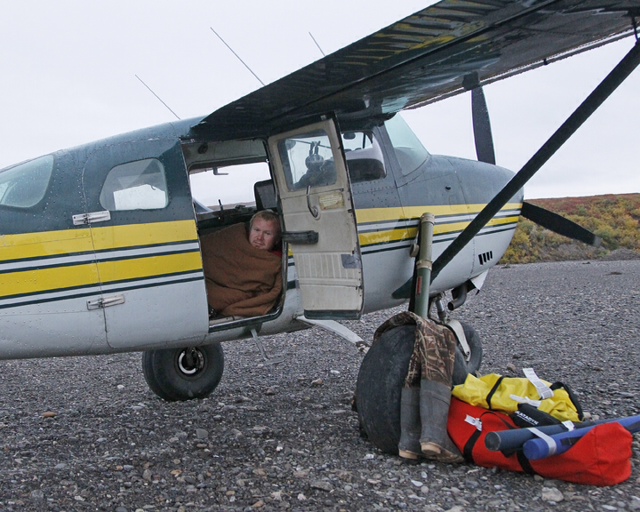 In Alaska, you sleep where you can, where the bears are least likely to get you.

service called Golden Eagle Outfitters out of the very place. One of the pilots, our friend Jesse, had a great technique for finding and angling for these massive char. Flying low and slow, with a good pair of polarized sunglasses, you fly the length of the river, spot a pod fish, land on the nearest gravel bar, and let the rod bending begin. 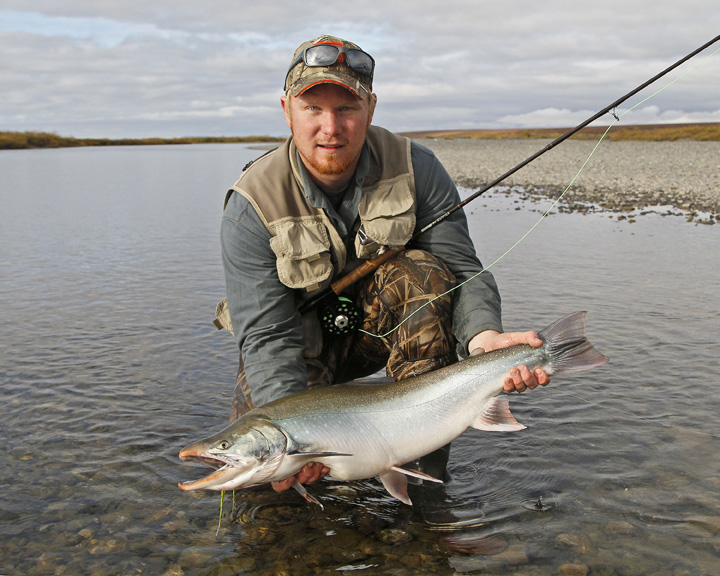 Swinging for chromers. Who wouldn’t do that?

All tactics seemed to work for these char. I simply swung a black/chartruese intruder off my spey rod. Jesse preferred the single hand swing/strip retrieve with a white Clouser, and my dad was digging on the baitcaster and Blue Fox set-up. I found my rhythm and hook-ups in greasy, steelhead-type runs. Jesse seemed to catch fish everywhere, in all types of water. 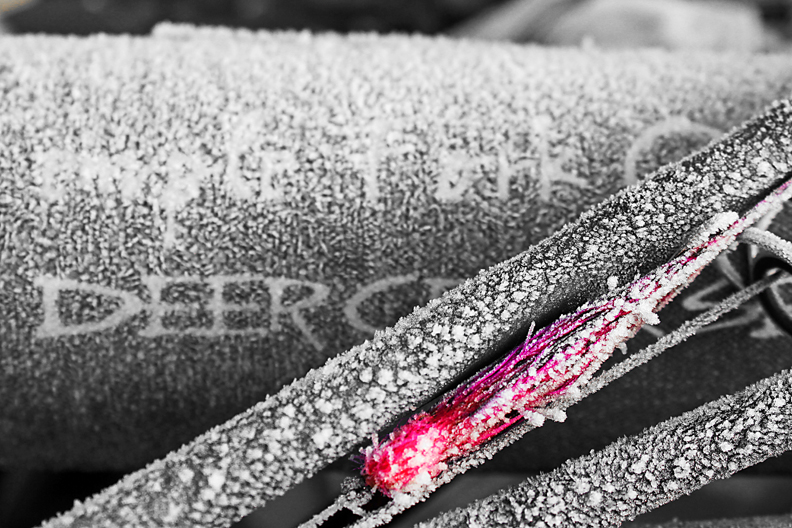 Returning to the fish in question at the start of this piece, he was dying, and my hands were starting to go numb. Traditional revival techniques were ineffective, and he seemed to be ignoring my words of encouragement. The writing on the wall said this spotted, chrome bruiser would soon be pushing daises in the Big River in The Sky. Considering the journey this fish likely made, I didn’t want to, but I found a solid rock, and proceeded to bonk him till the life was gone. 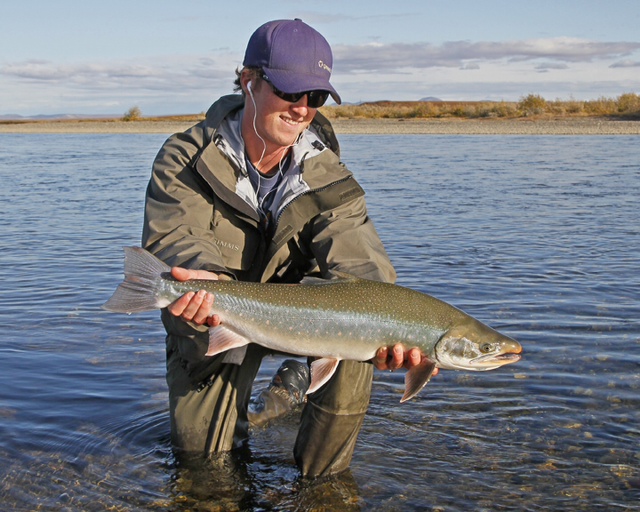 A nice char from Alaska.

To make a long story shorter, we had planned on eating Mountain House freeze dried meals and Clif bars during this expedition. However, before leaving Kotzebue, the possibility of eating a couple char was discussed, as well as our lack of cookware needed to comple that task. Jesse came through and produced a “pot” from their airplane hangar that could have doubled as a frying pan, World War I helmet, or what I’m positive its actual use was, a dog bowl. So, knowing we had something to cook in, I cleaned the fish, rinsed the filets, and prepared to make dinner. There was a slight problem, we didn’t bring anything to lubricate the “pot”. After brainstorming for several minutes, my Dad decided we would melt peanut butter in the pot, using the oils from the peanuts to make a Thai-ish, char and peanut butter scramble. Suprisingly, the marriage of Thai cooking, wild fish, and Alaskan ingenuity ended up a disgusting, burned, mess. Still, we ate from the communal dog bowl until our appetites were satisfyingly eliminated. Despite the botched meal, the trip played out as a success, and several days later, as the Cessna 206 bounced down the gravel bar, lifted off, and banked east towards Kotzebue, I reached several conclusions: Arctic char are beautiful, hard-fighting fish, I never should have left Alaska, and peanut butter is not an olive oil, butter, or Pam substitute.

Travis Dubois is one of Angler’s Tonic’s most dedicated readers and a real fishhead. He’s on the water more than most people I know, whether chasing trout near his home, steelhead in British Columbia and Alaska, or those char above the Arctic Circle.