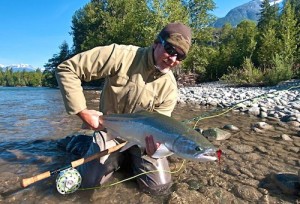 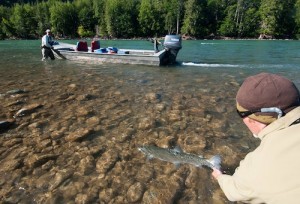 I spent some time fly fishing the Dean River for steelhead a few years back and it was one of the greatest experiences of my life. Magnificent scenery, chrome-bright and rocket-fast steelies taking Pick-Yer-Pockets and skaters, and great camp life at BC West.

Today I’ve been getting letters from several people noting a serious decline in steelhead and salmon abundance. And they think they know why. If you have any interest in reading about one of the top two or three steelhead fisheries on the planet, and how it is in peril, do it right now and respond, if you would, to the authorities who make management decisions in this beautiful coastal region of British Columbia.

From April Vokey
Good afternoon,
For those of you included in this email who I don’t already know
 
personally, my name is April Vokey and I am a British Columbia resident, steelhead guide, published columnist, occasional television personality and active conservationist.  I have included you in this email chain because I consider you an influential person who I feel I can trust to help with this matter…

As a full time fly-fishing guide on the Dean River off the coast of Bella Coola, I spend two and a half months a year on the river seven days a week.
With this being my fourth full-time season on the Dean, I have had the good fortune of being a firsthand witness to the salmon and steelhead returns during the peak months of June, July and August.

This year we have noticed a significant decline in the returns of all species in the Dean and the Dean channel.
On a good year, pink and chum salmon flood our waters, spawning in side channels, rolling at our feet and, of course, taking our flies.  This year the Dean stays quiet, nearly devoid of life and seemingly empty of both salmon and steelhead.
Even the bay in which our lodge rests has few spawning chum salmon in it and there is no mistaking the astronomical difference compared to years past.

The bears seek food in the shoreline and their scraggly bodies show that the outcome is affecting more than just the sportsmen.
This season, the Dean Channel has seen 21 commercial netting openings since June and has all four lodges, lodge guests and all camping anglers concerned about the confusing and non sustainable openings in Area 8, specifically region 8.8.

It is with my sincerest of concern that I write to you about this urgent and severe matter as it is a time sensitive issue that has been bullied and aggressively pushed by the DFO for years.
There comes a time where the bullied must fight back and here we are putting our gloves on… we ask that you step into our corner with us
An opening in this already barren waterway was approved today and it is with the utmost importance that we seek aid in drawing the attention of our government to the delicate balance of this fishery.  I have included an accurate response to this problem below and I hope it will enlighten you on just how badly this situation needs your aid.
Worries for our very near September returns of coho salmon soar high and with our backbone and hands-on field observations, we are asking for your help where you may lend it.  The direct email to the government official in this matter is Danny.Wagner@dfo-mpo.gc.ca though we are looking for larger media awareness at this time.

From Jeff Vermillion
Dear Mr. Wagner,
Your decision today to open the fishery on the 19th in Area 8 and efforts to downplay the number of boats on the coast is really disappointing- -particularly in light of the serious conservation concerns surrounding chum, Dean River steelhead and other smaller salmon stocks of conservation concern.  The effort and impact is double last year and far, far more than normal so please don’t insult us by greenwashing it.  In 2012, during 15 openings the average number of boats was slightly over 50.  In 2013, during 15 openings the average number of boats was 96.4.  Impact to steelhead: more than double.  Same to other species.  Etc. Etc.

It appears to me you could care less about the other valley businesses that depend on tourism or those care about salmon. It is also a slap in the face to hard working local fishermen in Bella Coola.  You clearly understand there will be enough boats to seriously affect their commercial fishing businesses for years to come.   That is not to speak to the damage done to wildlife, First Nations food and ceremonial salmon fisheries, recreational ocean sport fisheries, bear tourism etc etc.  These are all businesses that sustain your community.

Solid fisheries management begins by getting enough spawners to their spawning grounds to perpetuate the run of fish.  The only reason I mention this is it appears you may have overlooked this important piece of biology.   I’m thinking it’s probably a MSC condition to certification as well.  I’ve attached a video of the sort of compliance and enforcement we can expect when it comes to the fisheries being prosecuted by DFO this year. The video in case you can’t access it, can be summed up like this:  Dead chum.  Kick.  Dead steelhead.  Fling.  Dead sockeye…Squish.  Wasn’t it roughly 96% survival of non target species reported on the last DFO update?

While I’m sure you’re not too concerned about the decision to open the fishery on the 19th, my hope is that through activism and social media we are able to drum up change and a return to better management of the Central Coast.  Given the current crisis it’s clear too me that you are not managing either to sound conservation practices, the health of the fishery or the economics of coastal communities.  Finally and publicly, I’d like to ask for any aerial chum survey results you might have that support further openings.  On that front, please note we’ll be glad to follow with a Freedom of Information request if that public information is not provided.

From Brian Braidwood, President, Steelhead Society of BC
Re: Impact of Current Chum Fishery in Dean Channel on Wild Steelhead Stocks
I am President of the Steelhead Society of BC. We have been a part of the conservation of wild fish stock and in particular, Steelhead, in British Columbia since 1970. I write to impress upon you the need to re-think whether the current Chum fishery in the Dean Channel is meeting  the objective for this opening and in particular, what measures can be taken to reduce the impact of this fishery on wild stocks migrating at the same time in the same area.
It appears that Chum runs to the Kimsquit and the Dean are at all-time lows. There have been no chums observed on the beach, there have only been a hand full observed in the Dean  River and the Kimsquit run appears to be almost non-existent.  Based on these observations,  it may take the closure of this fishery in Area 8 to ensure the remaining fish get to the spawning beds.
Targeting surplus hatchery Chinook and Chums from the Bella Coola Hatchery has caused a culling of Dean channel bound wild  fish stocks which travel Fisher Fitzhugh at exactly the same time as the Bella Coola Chinook and Chums. If this fishery is meant to target Chinook and Chum from the hatchery,  then DFO needs to find a way to better target what it sees as “surplus stock”.  If DFO remains  insistent on continuing this fishery, it is time for a terminal fishery in Bella Coola that will better target the perceived “surplus”.
A gill-net fishery of nearly 100 boats cannot be seen in any way as being a selective fishery or harvest. That said, moving this fishery closer to the hatchery at Bella Coola may be a step in the right direction by removing/relocating this threat to wild stocks destined for other river systems
(the Dean in particular).
If DFO could create a more selective fishery nearer to the hatchery source, it might allow time for research to collect data on whether there is any surplus available from the wild stocks that migrate in the same area. Until such time that this research can be started, I implore you to re-consider the current opening.
Respectfully submitted
Brian Braidwood
President, Steelhead Society of BC

To Minister Polak from Brian Braidwood
Dear Minister Polak,
The Dean River in British Columbia is considered among the very best steelhead sport fisheries and every year anglers from around the world come to British Columbia in their pursuit.
However, large-scale non-selective gill net fisheries in Dean Channel and Fitz Hugh Sound (the outer reaches of Dean channel) capture and often kill steelhead in large number. During commercial gill net openings for chum salmon, sport fishing is dramatically impacted and many of the fish that do reach the Dean River bear fresh wounds from their time spent in these nets. Visitors are far less likely to come back after witnessing fish in this condition and are more likely to boycott steelhead fishing in Canada altogether.
When gill net fisheries do occur in conflict with steelhead returns selective harvest methodologies should be mandatory.  The Steelhead Society of British Columbia strongly recommends the implementation of selective fish harvesting practices (e.g., purse seine or use of weed lines) in Area 8 to help manage all incidental bycatch. Ideally, cork to web distances should be at least 100 cm to allow shallow swimming steelhead to pass over gill nets (as currently done in area 8-8). We determine that Fitz Hugh Sound and Dean Channel are all part of the same long body of water and; therefore, request that both these measures be implemented from sub area 8-1 to 8-8 and from July 1- August 31.
The implementation of these measures would continue to provide a viable large-scale commercial fishery while protecting critical non-target species. It would also support the conservation of one of the most important sport fish in the world and the substantial revenue they generate.
Yours truly,
Steve Morrow,   SSBC, NRT, BNRS, PBJOUR, Guide Blackwells Lodge, Dean River, BC
Brian Braidwood, President SSBC
CONTACTS FOR LETTER:
1. Hon. Gail Shea Minister of Fisheries and Oceans Room 556 Confederation Building Ottawa, ON K1A 0A6 (613) 992-9223 gail.shea@parl.gc.ca
2. Honerable Mary Polak Environment Minister PO BOX 9047 STN PROV GOVT Victoria, BC V8W 9E2 (250) 387-1187 env.minister@gov.bc.ca
3. Dan Wagner Fisheries Management Coordinator, DFO PO BOX 130 Bella Coola, BC V0T 1C0 (250) 799-5620
4. Jennifer Rice North Coast MLA Room 201 Parliament Buildings Victoria, BC V8V 1X4 250 387-3655 jennifer.rice.mla@leg.bc.ca