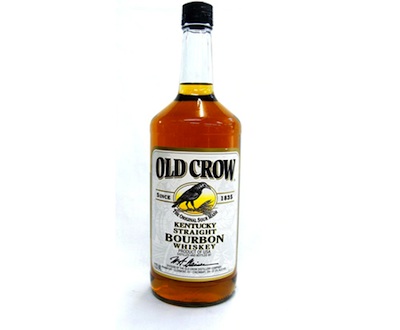 Was dancing around the net this morning when I came across this post on cheap booze. It happens that my grandfather drank Old Crow and, somehow, I took a like to the stuff, too. Best about this whiskey is it’s cheap. But it’s not bad to drink either and if you mix it with Coke, who would know the difference between it and Makers? Actually, I fell onto this site today because I was trying to pick a common brand of whiskey that you might find a Northwest steelhead angler holding in their hands on the side of a river, during a cold fall day when they are either drowning their lack of success or warming their bones, or for a celebration toast to a steelhead fought and landed. Old Crow a good pick? This is info I’ll include in the winter issue of Fly Rod & Reel. I want to make sure I’m accurate here. Any other thoughts on the subject of a good Northwest steelheading spirit. Here’s the post I read from a pretty creative writer at Serious Eats.com

Last Friday night I did laundry like a common sucker, but then I went to the grocery store and took advantage of a three-for-one special on chicken thighs. I considered this a wildly successful trip outside, as mid-February trips outside go, the sort of trip a man ought celebrate with a bottle of Old Crow. When I got home to display my bounty, I was not greeted in a manner befitting my status as Conqueror of Laundry, Hunter of Sharply Discounted Meat, and Gatherer of Cheap Bourbon. Instead, all I got was, “Why would they give three pounds of chicken to anyone who agreed to pay for one pound of chicken? Do you suppose there might be something wrong with the chicken?”

Well, yes, from the bird’s perspective, I suppose it might be “wrong with the chicken” to be dead in our freezer until such time as I see fit to turn it into pot pie innards.

Weird that a woman who doesn’t even like puppies would take the dead chicken’s side in this, but I didn’t have time to dwell on it, what with all the clean socks to wear and bourbon to drink.

“Yeah, I know it’s kind of dodgy to stock up on buy-one-get-two-free meat, but chicken doesn’t grow on trees, or maybe it does, but regardless, its thighs usually grow up to cost three times what I just paid, so let’s think happy thoughts and drink Old Crow. Darling,” said I, in the name of peace and reason and finally getting down to the drinking part of a Friday night that had been in full dark swing for two hours already.

“But I was going to get you bourbon for Valentine’s Day,” she said. Isn’t that thoughtful? Well, except for the outrageous implication that the bottle I brought home on Friday automatically precluded her from bringing more home on Monday. I am very lucky that the young lady does a lot more drinking than she does judging, but I still run into the occasional teaching moment wherein I must explain that the earth wouldn’t stop spinning if a person came into simultaneous possession of two bottles of bourbon.

Don’t worry, the world won’t end, Grey’s Anatomy will still be on next week—even if God forbid a hard-working man were to—

if left to my own devices, I’d just stick with whiskey on every liquor-drinking day.

I fear I’ve been misleading you fine people for the past couple months with all my talk of tequila and rum and weird dairy products that get mailed to me in test tubes. I like all that stuff, but if left to my own devices, I’d just stick with whiskey on every liquor-drinking day. The only whiskey I don’t like is Jack Daniel’s, which we’ll address somewhere down the line when this column devolves into Sobbing Uncontrollably as You Smash Everything on the Bottom Shelf.

Other than Jack, I love it all to such an extent that I even have a theme song, just like any other pro wrestler or delusional narcissist might.

I used to drink Eagle Rare, but that was back in the golden days of yore when I had disposable income and a blissful ignorance of fluctuations in the chicken parts market. Our household has to limp through another couple lean months until my research assistant graduates into the lucrative world of whatever it is she’s studying, and at $12 a fifth, Old Crow is the sturdiest support I’ve found.

Old Crow claims to be “The Original Sour Mash,” which is ominous given my hatred for originality and Jack Daniel’s, but whatever the label’s trying to threaten doesn’t turn out to be a problem in the glass. Cheap bourbon tends to be meek, but I could smell my cup of Crow from a couple feet away even though Friday’s cleaning day and the air was thick with bleach. (My research assistant might not be much of a chicken shopper, but she’s a world-class eradicator of dust and disorder.)