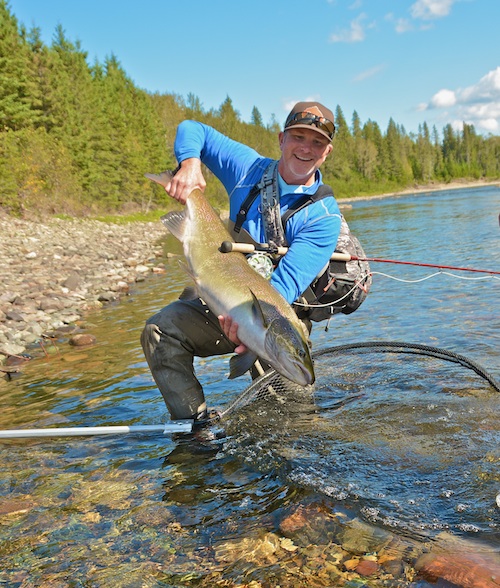 I had friends telling me all summer to not set myself up for the anadromous appocolypse, that being the mistake of expecting salmon or steelhead, or any other fish that runs from the sea to freshwater, to behave the same from one year to the next.

Last year, as some Angler’s Tonic patrons might remember, I visited the Gaspe Peninsula in September and had a great time on the Bonaventure and Grand Cascapedia rivers, bringing 10 fish to hand during six days on the water. I’d visited the Gaspe last year with the same motto I took there this year: If I catch one Atlantic salmon I’ll be happy and anything more than that could be considered icing on the cake. So, yes, I took my friends’ advice and set modest expectations.

Fortunately, this year proved to be even better than last, with more fish in the rivers and larger fish, on average, too. At least that was the general consensus, which was backed up by the Grand Cascapedia River Society and biologists who swam the river in wetsuits and counted fish. 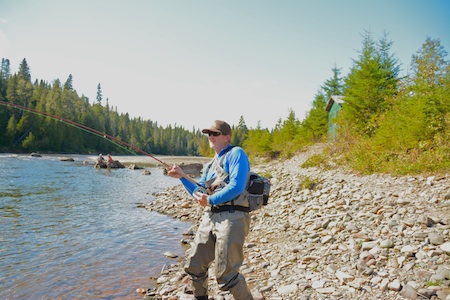 Few better feelings in the angling world. Salmon on the take. 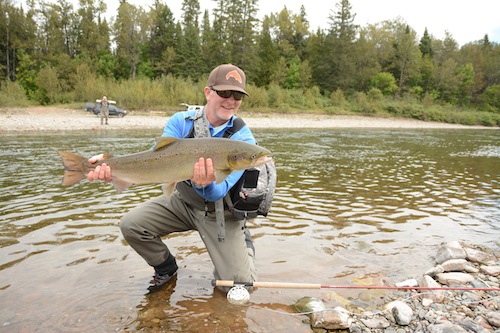 A nice fish from the Forks hole, but there would be much bigger Atlantics to come.

Atlantic salmon can be tight-lipped in September when low flows concentrate them in specific pools, and the crystal clear nature of these rivers offers anglers a bird’s-eye view of those fish. By this time,  most of those fish have seen flies—an array of them in fact—and it takes some serious tempting to get one to eat. That was the deal this year, repeating casts and trying to get a fly to drift down to the fish, or to find that one individual that was looking up and ready to grab. I found a few of those fish on the trip, but mostly I took salmon on sunk patterns off of sink-tips. I threw Spey rods almost exclusively although I did break out the single-hander for the dry-fly work. To temp those fish and keep the gods happy, I christened the river each day with a dab of Crown Royal 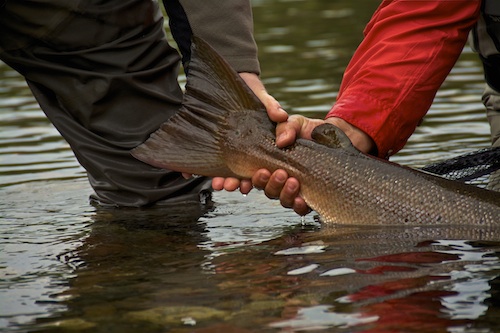 My bud Armando landed this mega-salmon at the Forks.

or Newfoundland Screech (See Drink of the Week) and then saluted each landed fish with a good hard pull off the flask. By week’s end I’d landed and released a dozen salmon, none under 10 or 12 pounds, one that must have weighed close to 40 pounds, three other fish better than the 30-pound mark, and two or three in the 25-pound range.

The only regret I have is that I lost a king-sized fish at Berry Mountain, one that was estimated to weigh between 50 and 60 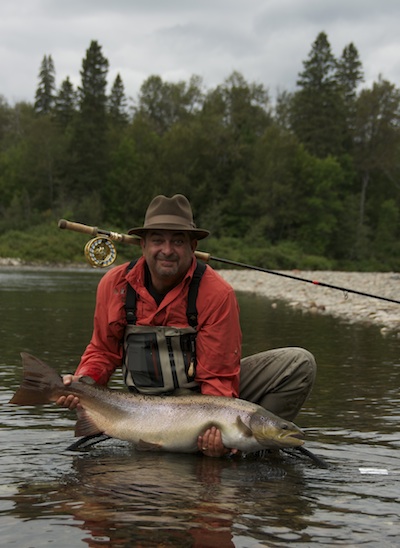 pounds. I had a great hookset on that fish, while a black General Practitioner was just swinging out of dark water, and I had a giant pool to fight that brute in. Unfortunately, my reel revolted and would only function in either full drag or full free spool modes. My knuckles are still a little sore. But I did see that fish jump three times and it’s something I won’t forget.

I stayed at Salmon Lodge (check here for rates/dates) during the entire trip and was treated tremendously as was the case last year. I fished the Petite Cascapedia two days, the Grand for three, I believe, and the Bonaventure for one. It was a great time to be in on the Gaspe, a great time to visit the guides at Salmon Lodge and to fish three great rivers just as fall was setting in on the region. If you are an anadromous fish freak, and you like throwing spey for some fish that are much larger than steelhead, on average, this is a trip you should try and swing. Any takers? Let me know your interest level and perhaps I can set something up. NOTE: MORE PICS BELOW.

Gear: Got to take some sweet new gear to the Gaspe and I worked it hard during my six days on the water hucking-big. Here’s a rundown. SIMMS’ Vapor Boot—The guides were drooling over these. Lightweight, just as comfortable as hiking boots, sticky rubber bottom with screw-in studs, sturdy enough to provide the support my ankles need. Check em out Here. SIMMS Slick Jacket—Impervious to the rain that hammered down on us at times while fishing the Gaspe Peninsula. This jacket has a nice soft on the face, but sturdy collar, a great hood that cinches down and allows you to look around without blocking your vision, and pockets that can be opened so that you can reach inside the jacket and tuck your hands into your waders if needed. Can you say winter steelhead and saving those hands from pure misery? SIMMS G4 Pro Stockingfoot Waders—Super solid waders. Can’t go wrong. Banged around in these like crazy. Clamored over the rocks. Hiked through the forests. No worries here. These things are comfortable, super-durable and will keep you dry. Redington Dually Spey Rod—Just another super-sweet and affordable rod from Redington. I put the RIO SwitchChucker shooting head on this 7130 Dually and it threw really well with some larger flies and some T-8 tips. Also ran the RIO 480-grain Scandi line on this and that was a perfect match. Using that setup I was able to throw small wets on a dry line and I was able to put on a light sink tip and larger flies to get down. This was the setup I used when I wanted a nice delicate presentation. Sure, Redington supports Tonic and it’s in my favor to say nice things, but I have to say for (get this) $249 this rod gets you into the spey game super cheap and it’s not a rod you have to hide when the big boys show up. You can huck with this. You would be doing yourself a disservice if you didn’t pick one of these up and huck. SAGE Method Spey Rod—Ok, so you want the killer finish and fancy rod tube and the modern technology. And you want to huck super-big. Can’t go wrong here brothers. I fished the 7126 and there were times when I had to throw well over 100 feet of line, tip and leader to reach some pockets on the far side of the Grand that held fish. To complicate matters, I had to wade to my armpits and then huck. We even joked about the common directive I’d get from the guides, first thing in the morning. “Wade as deep as you can, Greg, and then throw that thing as far as you can.” That was worth some good laughs. The Method, which replaces Sages TCX line, did it for me. About the TCX rods;  the TCX Deathstar was my favorite spey rod prior to getting the Method. It was the rod I fished. But this Method is “hway” better and I don’t see going back to the Deathstar. In fact, I was laughing at times because the Method was so much fun to throw. And this: typically, when I throw spey for salmon or steelhead it takes me a day or two to get into it and start throwing well. But I picked this rod up and immediately felt comfortable with it. Didn’t have to force things. Just took it slow and let the rod do the work. My suggestion? Try out one of these rods. I matched the 7126 with RIO’s 525-grain Skagit Max shooting head. Pretty amazing. Orvis Guide Slingpack—Was not a fan of slingpacks a while back. Teased my friends about their “purses.” But, as mentioned, I had to do some serious deep wading on the Grand and even when up to my armpits I could cinch the Slingpack tight and keep it high on my back, which kept it out of the water. This one was big enough to carry four fly boxes and all my tippet, plus a flask (Crown Royal, by the way) and a small camera.

Hope you enjoy the pics from a great week. 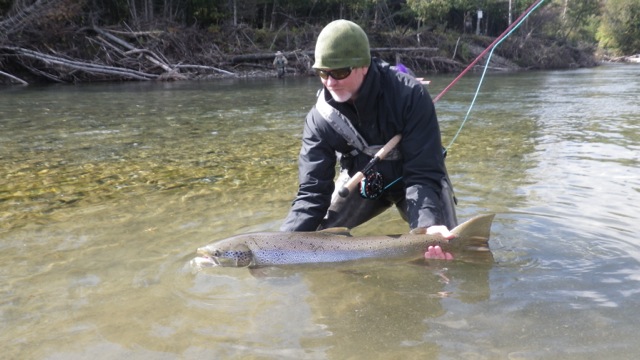 Big one from the Petite. 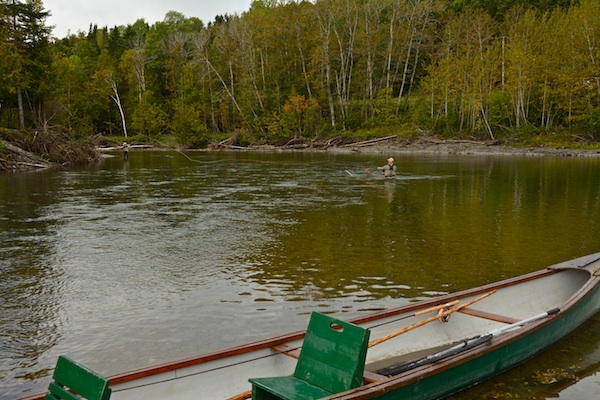 My friend, Big John, let’s another angler know how he feels about being low-holed on the Petite. More on this subject later. I’ll tell you, I’ll never forget the look on that miserable angler’s face when a Snelda landed about two inches from his right boot. 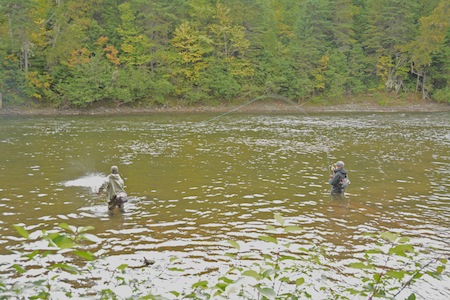 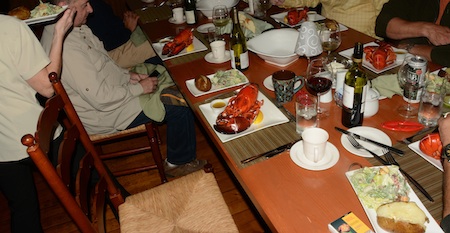 Nothing like a lobster feed when you get off the water. 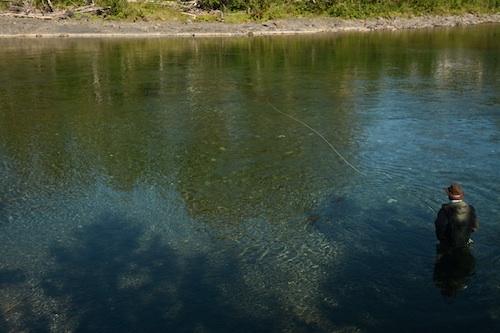 I think if you cast right there . . 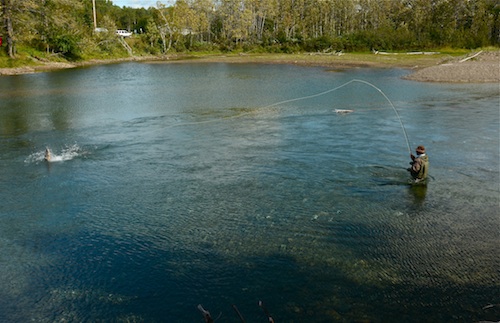 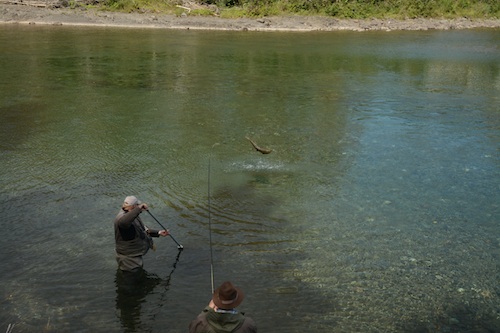 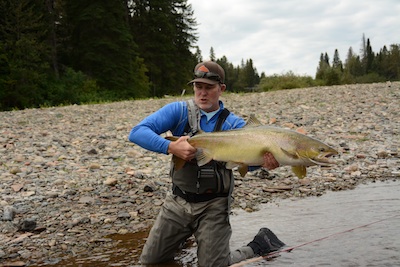