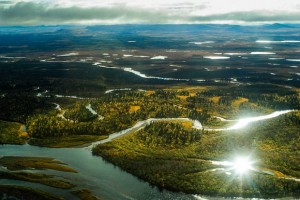 Anglo American, one of the key backers of the controversial Pebble mine in Alaska’s Bristol Bay region, announced Monday that it is withdrawing from the Pebble Partnership — and will take a $300 million hit for doing so. The London-based Anglo American has a 50 percent share of the Pebble venture, with Northern Dynasty Minerals out of Vancouver, Canada controlling the other half. The company said that Northern Dynasty will assume sole responsibility for the project.

In a statement, Anglo American CEO Mark Cutifani said that the company was seeking other investment opportunities.

“Despite our belief that Pebble is a deposit of rare magnitude and quality, we have taken the decision to withdraw following a thorough assessment of Anglo American’s extensive pipeline of long-dated project options,” Cutifani said. “Our focus has been to prioritize capital to projects with the highest value and lowest risks within our portfolio, and reduce the capital required to sustain such projects during the pre-approval phases of development as part of a more effective, value-driven capital allocation model.”

RELATED:
New EPA head gets earful of Pebble Mine chatter in Southwest Alaska meetings
Pebble Mine fears shadow Alaska land plan for Bristol Bay area
John Shively, CEO of the Pebble Partnership, insisted that reports of Pebble’s death are premature. “Obviously we’re disappointed, but we still have a great project,” he said. “Anglo American was reviewing all of their assets. When they got to us, we didn’t make the cut,” he said.

Shively, who learned of the pullout this weekend in phone calls from the owner companies, said he expects that Northern Dynasty will decide in the next two or three weeks what its next steps should be. He said READ MORE at The Alaska Dispatch