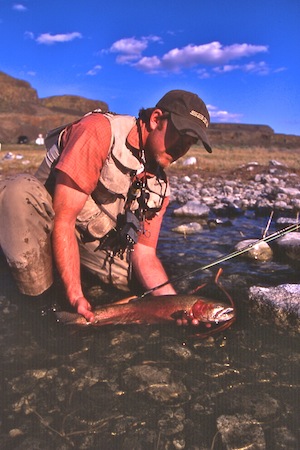 It wasn’t like I was about to jump in the truck and head to southeast Oregon to fish Lahontan cutthroat trout, but I do keep my eyes on efforts to reestablish that fish to its traditional watersheds, and I have had a great time catching that fish in lakes. They are pretty fish and they are big. So this story caught my eye and it is testimony to how difficult fisheries biologists have it these days when trying to favor one fish over another, even if it’s the right thing to do and the best thing for anglers in the long run. Here’s the word:

Efforts to restore a population of native Lahontan cutthroat trout in McDermitt Creek in southeast Oregon suffered a setback earlier this month when biologists discovered a reproducing population of non-native brook and rainbow trout in the river.

According to Shannon Hurn, ODFW fish biologists in Hines, biologists were aware that some non-native trout had been illegally re-introduced into the creek but didn’t realize the extent of the of the population until they tried to remove it.

“We had hoped to be able to remove most of the non-native trout in order to set the stage for continued reintroduction of native Lahontan cutthroat trout,” Hurn said. “However, we were surprised by the number and size of the brook and READ MORE