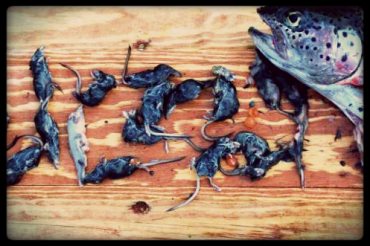 Saw this interesting story in the Alaska Dispatch and thought I would share it with you. We all know that trout eat rodents, but this is amazing. I’ve fished the Kanektok for rainbows, using mice patterns, and scored big. The nearby Arolik is even better known for its rainbows eating mice, shrews and voles. Of course, this provides some of the best surface fishing in the world, with visible takes sometimes overwhelming an angler. If you want to throw mice for rainbows on the Arolik and the Kanektok, give Deneki Outdoors a shout and let them know that Tonic sent you. You can fish both rivers out of their lower river camp called Alaska West. Here’s the read on this shrew-crazy trout. And please tell other Tonic readers what is the strangest thing you’ve ever found in a fish’s belly.

FROM THE ALASKA DISPATCH: Control over one’s appetite, while long believed to be an exclusive human concern, apparently also affects trout living in the Kanektok River, which runs through the Togiak National Wildlife Refuge northwest of Bristol Bay, a multibillion-dollar commercial fishery in Southwest Alaska.

Last month, a team of state biologists were hip-deep in a tracking project geared at placing radio transmitters on at least 200 of the bigger rainbow trout in the Kanetok. Fisheries are managed in Alaska by state scientists and the tracking research will further understanding of the trout’s migration and movements through the Bristol Bay watershed.

Several trout populations exist in the Kanektok, according to the study, meaning that the various groups may need to be managed separately instead of in one large, homogenous group. During the course of catching and releasing them, Department of Fish and Game biologists caught a 19-inch trout that was bleeding and unlikely to survive. The 480-millimeter-long rainbow was cut open and the scientists found a surprise: inside the swollen fish were READ MORE