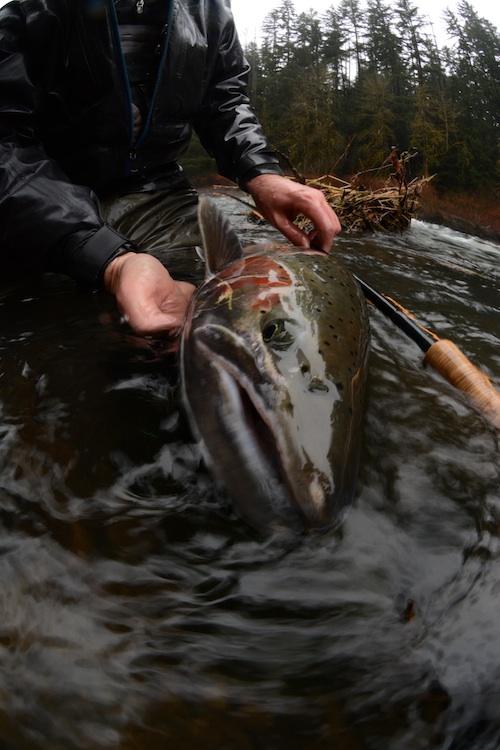 I’ve sang some praise for Redington’s Dually, especially after my trip to the Canada’s Gaspe Peninsula last September, fishing for Atlantic salmon. On that trip I threw Sage’s Method and Redington’s Dually and both performed great. The Dually, for some reason, seemed buttery to me, meaning it was pretty effortless to throw. It has a smooth stroke and plenty of power at the end. I loaded it with T-14 and largish Atlantic salmon flies and felt great being on the water with. I also loaded it with a Scandi line and threw that with an integrated head. Again, smooth. I threw the Dually again on Washington’s Skagit River in January and again was impressed. And I just got back from the OC (the Oregon Coast) where I was able to test the rod again. I still think the same thing: It’s sweet to throw. This is a rod, I believe, that almost any spey caster would be happy with, and at a price point of $250, nobody has an excuse not to give this effective style of fishing a go. Here is a vid from Redington showing the stick in action. Have you thrown the Dually? If so, please share your impressions with other AT patrons. Want to match this rod to a perfect line? String up a RIO Switchucker and you’re off to the races.

The Dually by Redington from Far Bank on Vimeo.

This entry was posted in Northwest, Spey, Videos and tagged how to spay fish, Redington Dually, Spey rods for steelhead. Bookmark the permalink.