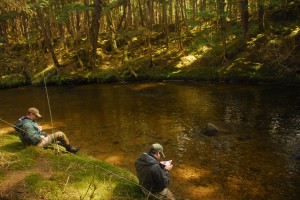 As all of you probably know by now, southeast Alaska and the Tongass National Forest are part of my soul. I love the area and hope that all of its best attributes can be protected. Unfortunately, here’s some new words on how our United States Forest Service is hacking the Tongass to death. Read on in a report from Trout Unlimited.

JUNEAU, Alaska — A new report finds the U.S. Forest Service’s four-year-old pledge to end old-growth logging and to support key economic sectors in Alaska’s Tongass National Forest has stalled.Headwaters Economics, a Bozeman, Mont.-based research firm, examined several years of Forest Service budget and staffing numbers on the Tongass as well as the economics of timber sales from the country’s largest national forest. Among the report’s main findings is that the federal agency continues to spend most of its Tongass budget on a money-losing timber program that supports very few jobs while neglecting opportunities for investment in more robust industries such as fishing and tourism.The report demonstrates that despite the Forest Service’s May 2010 announcement that it would transition out of old-growth logging and invest in economic growth sectors, it has
failed to do so.“The numbers speak for themselves. The budget and staffing allocations show that old-growth logging is still the Forest Service’s top priority on the Tongass National Forest,” said Ben Alexander, the report’s chief author. “Focusing so heavily on timber, which is a minor source of employment, while neglecting opportunities in other more important economic sectors is a huge loss to the regional economy.”

“Four years ago the Forest Service said it was poised to make needed shifts in how it manages the Tongass. The Headwaters report makes clear that little has changed. The agency is stuck in outdated thinking where old-growth logging comes first, at the expense of all other industries,” said Austin Williams, director of policy for Trout Unlimited’s Alaska Program.

Through use of the Freedom of Information Act, Headwaters Economics accessed the Forest Service’s budget and staffing data on the Tongass from 2009 to 2013. The information reveals that Forest Service spending on timber continues to account for the largest portion of the Tongass National Forest budget – roughly 34 to 45 percent. It also shows that for each of the five years spending on timber accounted for more of the Tongass’ budget than fisheries, wildlife, recreation and watershed protection combined. The focus on logging comes despite the fact that timber accounts for less than one percent of southeast Alaska employment while tourism accounts for 15 percent and fishing accounts for nine percent.

“The Forest Service’s approach to managing the Tongass might have made sense 20 years ago when we had two large pulp mills operating, but those days are over. As a small business owner, I’m focused on maximizing my return on investment and I think the Forest Service needs to start thinking that way too. If the agency wants to stimulate job creation in southeast Alaska, it should protect important salmon habitat and focus on the fishing and visitor industries because they have real opportunity for growth,” said Kirk Hardcastle, co-owner of Taku River Reds, a Juneau-based commercial seafood company. Hardcastle is also a member of the Tongass Advisory Committee, a stakeholder panel charged with advising the government on how to make the Tongass transition a reality.

The report found significant declines in budget and staff for Tongass recreation and visitor services. Between 2011 and 2013, the Forest Service’s recreation staff on the Tongass dipped from 60 to 47 full-time employees and the agency announced this year that it decommissioning a number of visitor facilities because of future cuts to its recreation budget.

“It makes no sense to me why the Forest Service refuses to invest in seafood and tourism, which bring significant employment, wages and spending to our region,” said Dale Pihlman, owner, Alaska Coastal Quest, a small-boat cruise company based in Ketchikan. “More than one million visitors tour southeast Alaska every summer. They come to see glaciers, bears and whales, not clear-cuts. If the Forest Service invested in tourism and fishing like it does in old-growth logging, we could put more Alaskans to work and offer more options to explore America’s most rugged and unique national forest.”

Other findings from the report:

“It’s an outrage that in 2014 the Forest Service continues to subsidize clear-cut logging at such a huge cost to taxpayers in America’s last remaining stronghold for wild salmon and steelhead. I moved my business to southeast Alaska years ago because many Washington State salmon and steelhead runs became threatened or endangered. We shouldn’t make the same mistakes in southeast Alaska,” said Rob Endsley, owner, Prince of Wales Sportfishing, a charter company located in Craig, Alaska.

“Most of us in the fishing industry were cautiously excited when the Forest Service announced the Tongass transition in 2010. We felt like we were finally being recognized for the jobs and economy that we bring to southeast Alaska. It was all smoke and mirrors though. Nothing seems to have really changed,” Endsley said.

Trout Unlimited is a non-profit organization with 147,000 members nationwide dedicated to conserving, protecting and restoring North America’s coldwater fisheries and their watersheds.