Climate Change Could Be Good For Dolly Varden 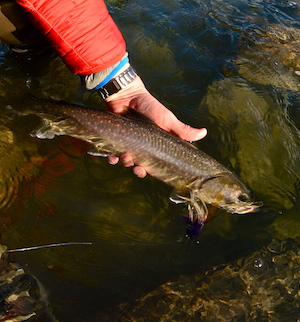 I don’t know how you feel about dolly varden/bull trout, but I like them. Especially when it’s so hard to find steelhead on some of western Washington’s rivers these days. In Alaska, dollies always play as the ugly stepchild to sea-run cutthroat, steelhead and salmon, but at least  most people aren’t throwing them on the bank to rot like they did in the old days. So, you may take news that climate change is helping dolly garden as a good thing. I’ll take whatever fish I can get, but I think the jury is still out on all of this. Here are the details of new research, presented by the Columbia Basin Bulletin.

Not all species may suffer from climate change. A new analysis shows that Dolly Varden, a species of char common in southeast Alaska, adjust their migrations so they can keep feasting on a key food source — salmon eggs — even as shifts in climate altered the timing of salmon spawning.

The resiliency of species to climate change may depend on how well they adapt to climate-driven changes in their food and habitat, such as altered growth of plants they feed on. A mismatch in timing between predators and the availability of prey could cause some species to lose access to food. But others such as Dolly Varden that successfully adjust to shifts in climate and prey offer a climate change story with a happy ending, according to the study published in Freshwater Biology.

The Dolly Varden’s secret appears to be that instead of taking its migration cues from environmental variables such as water temperature or streamflow, the species cues directly off the presence of salmon the Dolly Varden depend on for food, the study found.

“Despite warming temperatures and shifting salmon migrations, Dolly Varden do a great job of following their food,” said lead author Chris Sergeant of the National Park Service’s Inventory and Monitoring Program in southeast Alaska. “Species that can handle a high degree of variability are the ones that should be most resilient to further changes associated with climate.”

Dolly Varden get most of their energy over the course of each year by gorging themselves on salmon eggs, which are abundant in summer and rich in energy thanks to the same fatty acids that make fish healthy for humans. Eggs from any single species of salmon may be available during a narrow spawning window of two to six weeks. The Dolly Varden must follow salmon migrations closely to take full advantage of this annual salmon egg bonanza.

But salmon migrations are shifting as the climate warms. Previous research by the University of Alaska and NOAA Fisheries’ Alaska Fisheries Science Center in southeast Alaska’s Auke Creek has shown that pink and coho salmon now migrate to their spawning grounds 10 to 17 days earlier while sockeye salmon migrate eight days earlier.

Instead of falling out of synch with salmon, though, seagoing Dolly Varden in Auke Creek have accurately adjusted their annual migrations from the ocean back to freshwater to stick with the salmon. The adjustment has maintained their access to egg meals, according to the new research that includes coauthors from the University of Wyoming and NOAA Fisheries’ Northwest Fisheries Science Center.

The research depended on a wealth of fish data from a weir on Auke Creek maintained primarily since 1980 by NOAA Fisheries’ Alaska Fisheries Science Center Auke Bay Labs, supported by collaborations with the University of Alaska Fairbanks and Alaska Department of Fish and Game. From 1997 to 2006 crews counted and measured Dolly Varden migrating from the ocean, past the weir and into READ MORE