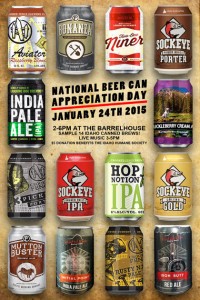 Show up for a float down the river with a six pack of bottled beer and everyone knows right away what you are: A rookie.

That’s right. Bottles are kryptonite to a quality float trip because 1) they can break and 2) they don’t crush down so you end up having to pack out a way more trash than you would have if you’d only been smart enough to bring canned beer.

The problem with that whole scenario is that many brands of craft beer haven’t been available in cans  . . . until the last few years when Kettle House Brewery started pumping their Cold Smoke and Double Haul into 16-ounce river-friendly cans. That trend has taken off and now many of our favorite brews are available  in the proper containers. Here’s more on the phenomenon straight from the Idaho Statesman.

FROM THE IDAHO STATESMAN

Matt Gelsthorpe, the Boise Co-op’s beer buyer, chuckles when he remembers considering craft beer in cans to be a summer phenomenon.

“Cans make a hell of a lot of sense,” Gelsthorpe says.

Remember those words as you crush an empty Jan. 24 on National Beer Can Appreciation Day. If you scan the aisles of the Co-op or any beer retailer, it’s clear there’s plenty to appreciate. Craft cans have erupted. In 2010, more than 70 craft breweries in the United States were canning, according to CraftCans.com. Today, it’s more than 500.

Josh King, head brewer at Sockeye Brewing, attributes much of the Boise company’s success to producing beer in cans. “It’s given us huge growth,” King says.

In the mid-2000s, early adopters such as Colorado-founded Oskar Blues Brewery tried to teach us about the wonders of aluminum. Eventually, other widely distributed craft breweries such as California’s Sierra Nevada and Colorado’s New Belgium introduced canned versions of their popular products.

As craft cans went mainstream, Boise breweries such as Sockeye, Payette and Crooked Fence flooded the Boise area with cans. You knew it was more than a passing fad when soccer moms began lugging 24-packs of Sockeye Dagger Falls IPA cans in Costco shopping carts.