How Many Salmon Can The Pacific Support 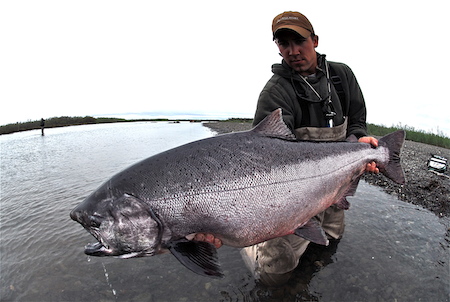 Here’s a topic that I’ve always wondered about. With hatcheries shoving salmon into the ocean in major numbers, some of them just for roe recovery fisheries (think chum salmon in Southeast Alaska), when will the food supply run out? How many herring and krill does it take to feed these fish? I was perusing the Columbia Basin Bulletin today and here’s what I learned. Thought all of you might be interested, too.

As pink salmon abundance in the ocean off British Columbia and Alaska is climbing, sockeye salmon abundance and size is declining and the competition for food between the two species is the reason, according to a recent study.

Pink salmon in the North Pacific Ocean reached 640 million adult fish in 2009. At the same time, many Fraser River sockeye populations in British Columbia saw significant declines. The outcome of the study suggests that there is a limit to the number of salmon the northern ocean can support.

The study predicts that as pink salmon numbers increase from 150 million to about 600 million fish, Fraser River sockeye abundance will decline by 67 percent from about 16 million fish to 5.3 million.

The rising number of pink salmon in the northern ocean, according to the study, is due to an increasing number of hatchery salmon that are produced in British Columbia, Alaska and Russia, causing some to call for international action.

Pink salmon, often known as humpback salmon, is the smallest and most abundant of the Pacific salmon species.

“Not too long ago managers of hatcheries thought the ocean had unlimited carrying capacity to support both wild and hatchery salmon,” said Dr. Greg Ruggerone, a senior scientist at Natural Resources Consultants in Seattle.  “Our study provides multiple lines of evidence indicating that salmon compete for food at sea and this may result in reduced growth and survival.”