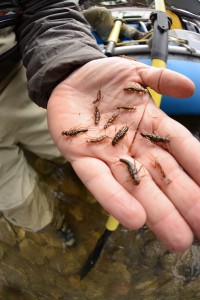 Here’s a little report that my friend Jed Fitzpatrick, who owns Bitterroot River Guides, cranked out after he and I and a few others floated Montana’s Bitterroot River last week. With some colder weather the river is probably on the drop and fishing could be really good right now. Prime time is 2 to 4 in the afternoon.

Here’s the dirt, in Jed’s words: It’s turning into another fine Skwala season here on the Bitterroot with tons of nymphs ready to hatch and good fish already looking up for a bug.  Our weather took a turn for the better, shooting up to seventy degrees a couple times and really bringing out the solar energy needed to get the bugs hatching.  Skwalas are looking for 46 degree water temps before they pop, so we’ve seen the bugs waiting until well into midday to start emerging.

With that in mind, fishing-wise, take your time out there and don’t get into a big hurry.  There’s plenty of other boats and anglers out there enjoying the hatch, and when the fishing is good, everyone is catching, and when it’s off, it’s off.  That’s how the Bitterroot works: when she’s ready this river will fish lights out, but not until the fish and the bugs are ready to play along.   Nymphing rarely saves a tough day here, but patience and working good water will bring many fine fish to the net. 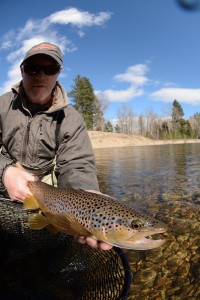 So every day should have it’s better moments until the surge of runoff wipes the slate clean for the upcoming summer season.  We have a cool front with moisture predicted for the coming week which may tone down the Skwalas a bit, but will certainly favor the much awaited March Brown.  On our float yesterday, READ THE REST