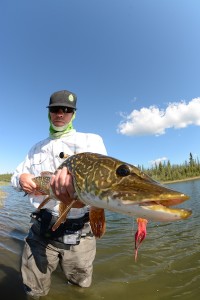 What some people see as a nuisance, others see as opportunity. Now, I’m not saying that northern pike belong in Lake Roosevelt, let alone the entire Columbia River system, but if they are there they can be caught. Here’s an opportunity for our E-WA based brethren to throw for these toothy creatures in shallow water. Spring is the time. Might be fun to give it a try. If you get out there let us know how you do and send some pics.

From THE COLUMBIA BASIN BULLETIN: Fisheries managers in eastern Washington have been collecting growing evidence that invasive northern pike have established a presence in Lake Roosevelt, presenting a growing threat to salmon and steelhead reaches in the Columbia River system.

In early March, an angler provided a photograph of about two dozen dead pike that was taken in the Kettle River Arm that flows into Lake Roosevelt. It appeared that the pike were stranded in a shallow reach of the river arm that became dewatered as Lake Roosevelt was drawn down, said John Whalen, the Spokane-based regional fisheries manager for the Washington Department of Fish and Wildlife.

Since then, there have been have additional reports of anglers catching pike in the same area, Whalen said.

“Anglers have been catching pike, particularly in the Kettle Falls area … and a shallow area called Marcus Flats,” he said. “We had some reports last year as well.”

A pike suppression netting effort has been underway for the last few years in the Pend Oreille River near Newport, Wash., in an effort to curb chances of them moving downstream into Columbia River waters, such as Lake Roosevelt.

“We do want to get more information about what we’re seeing with pike in Lake Roosevelt,” he said,