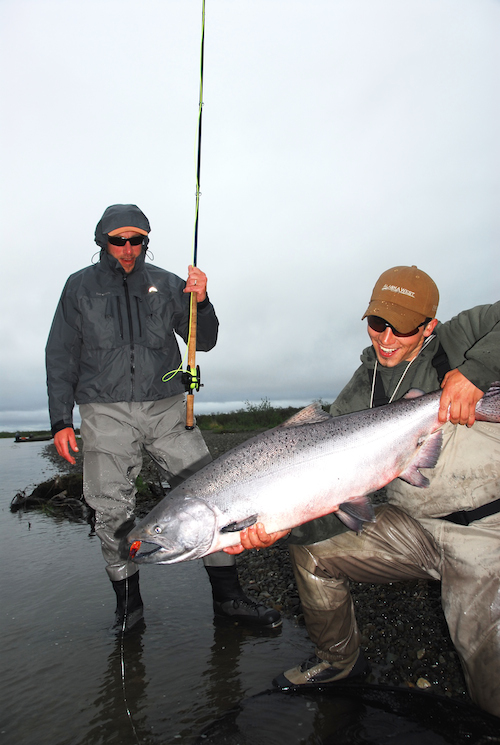 This news comes on the heels of  a recent announcement that the king salmon season for streams draining into the Bering Sea has been cancelled for 2015. Hopefully that closure, plus the implementation of these new pollock fishery recommendations will stem a tide that has seen king salmon runs to remote western Alaska fisheries plunge in recent years. Read the story here and let me know if you think the Council is doing enough to save our sacred kings. GT

Federal fisheries managers have reduced the allowable incidental catch of Chinook salmon in the Bering Sea pollock fishery, in a policy change aimed at boosting returns of kings to western Alaska rivers.

The North Pacific Fishery Management Council’s approval of the action on April 11, at its spring meeting in Anchorage, would reduce the prohibited species catch limit of kings to 45,000 fish and the performance standard limit to 33,318 fish in years of low Chinook salmon abundance.

The council’s decision still must proceed through the federal regulatory process, and is not likely to be activated before 2017, according to Glenn Merrill, head of NOAA Fisheries’ Alaska Region division of sustainable fisheries.

The Bering Sea salmon bycatch motion introduced by Alaska Department of Fish and Game Commissioner Sam Cotten also included revising regulations to incorporate chum salmon avoidance into the Amendment 91 incentive plan agreements. That would include a requirement that the IPAs include, among other details a rolling hot spot program for salmon bycatch avoidance and an agreement to provide notifications of closure areas and any violations of the rolling hot spot program to at least one third party organization representing western Alaskans who depend on salmon and do not directly fish in a groundfish fishery.

The council’s action came on the heels of letters from fishing and tribal entities representing 118 Alaskan communities, who told the council of the severe socio-economic and cultural impact that depleted salmon runs have had on them.

While spokespersons for the pollock fleet have said repeatedly that they are taking all steps possible to keep salmon bycatch low, tribal and fishery groups in Western Alaska told the council that was not enough.

“The state successfully persuaded the council to reduce bycatch by about 30 percent, “ said Duncan Fields, a council member from Kodiak. “Now it wasn’t as far as we would have liked to have gone, but the fact that this occurred is a huge win for the state.”

The council’s action adopts abundance indices that trigger the imposition of these revised incentive caps and hard caps. Based on salmon abundance in the Unalakleet, Upper Yukon and Kuskokwim rivers, as determined by the Alaska Department of Fish and Game, they would be implemented.

“This is significant,” he said. “This is a large policy change, a large expansion of the council’s involvement in protecting chum resources, and will prove significant over time in terms of the chum savings for western Alaska fisheries.”

Copies of all written testimony on this issue is online at www.npfmc.org

Following is a Recent Announcement as repurposed on Deneki.com

The Alaska Department of Fish and Game (ADF&G) has recently issued a sport fishing closure for king salmon in the Kuskokwim River drainage and Kuskokwim Bay tributaries for the 2015 season. According to ADF&G, western Alaska king salmon stocks are experiencing a period of low productivity, and a sport fishing closure for king salmon is needed to help reach escapement goals (the number of fish that successfully return to their spawning grounds).

Last year, due to a similar closure of commercial and sport fishing for king salmon, as well as with restrictions to subsistence fishing, king salmon escapement goals were reached throughout the Kuskokwim drainage. Therefore, ADF&G biologists are hopeful that similar action in 2015 will help to restore present king salmon stocks in western Alaska.

Being located on the Kanektok River (located within the Kuskokwim drainage), we applaud the state of Alaska’s vigilance to protect our beloved chinook, and are eager to do what it takes to look after their well being.

Due to overlapping run timings of king and other pacific salmon (namely chum salmon), as well as a relatively narrow river channel