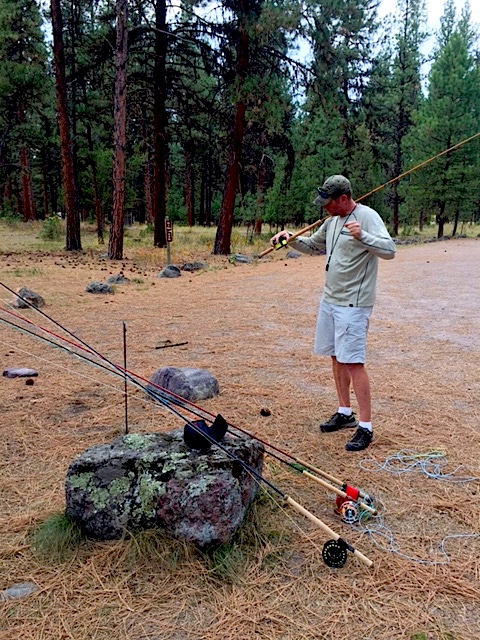 Just got my hands on Echo’s new fiberglass Spey rod, the 7129 model to be specific. Actually, I got my hands on this rod in July when Red Kulper, marketing director for Echo, handed one to me and said, “You got to throw this thing.”

I don’t get all caught up in stepping backwards with technology trends, i.e. bamboo and tenkara, so I wasn’t all fired up to throw glass. But I had Red send me a rod and then I promptly sent it off with a friend who was headed to Idaho’s Clearwater. I was off hunting elk, antelope and birds, but I got some texts back from Idaho—one stated, “I like the Echo rod. Super fun to throw.”

So yesterday, for the first time, I lined up the rod with Airflo’s 480 grain Scandi Compact line and set out to find some fall browns on a sizable nearby river. I haven’t thrown a Spey rod in a year, at least, and when I take time off from the long stick I often have trouble finding my groove when I get one in my hands again. Until yesterday. I picked up that rod, did a sweep, set the anchor and launched a bug all the way across the river. What the hell! Next cast, same result. And the next. Reverse double Spey. Snap T. Etc. All performed nicely.

I think this rod is super easy to throw and very fun to play with mostly because it really, really flexes, unlike many of the graphite, super-fast daggers that manufacturers are building these days. Don’t get me wrong. I like the new technology and probably will continue to fish the super-fast rods, but I’ve decided that whenever I head out for steel or salmon, I’m packing a super fast action graphite, a lesser graphite as a backup, and this Echo Glass just for the fun factor. In fact, I can’t wait to hook my first steelhead on this stick and to feel the big pull. I know I’ll feel a steelhead because this rod’s tip allowed me to feel the pull from a couple 14-inch cutthroat that grabbed on the swing yesterday. And I really felt the pull from a few bigger fish, bull trout, that ate October caddis nymphs on the swing. No browns, but those bulls were cool to see.

Ok, not sold yet? Here’s another pitch. These rods only cost $299. That is an absolute steel in my opinion. So, if you’re looking for a Spey rod to start with, or just something to add more fun to the day, this thing is the ticket. I have the seven-weight model but I might hit up ol’ Red for the six-weight version, too. Too much fun not to try them all.

Here’s some info, straight from the sources. By the way, I didn’t see this video until after I penned this piece, so Echo’s goal certainly was achieved by me.