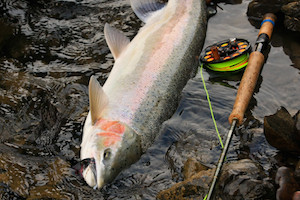 If you’re a steelheader you dream about British Columbia’s Skeena River system and all the great opportunities that exist there. Unfortunately, fewer steelhead have returned to the system this year, but that doesn’t mean you should cancel plans to visit. Even with lower numbers than usual the Skeena remains the top bet in the world for steelhead, a network of famous rivers and particular runs that boot out metalheads to 30-pounds or more. Here’s a report on steelhead returns this season, straight from the boys at Fly Water Travel.

If steelheaders fishing the main Skeena and its tributaries felt that they caught less fish this year than usual, that is because there were less fish available to catch than in previous years. The final Tyee Test Index numbers are in and below is what Mark Beere, Senior Fisheries Biologist for the area, say about the numbers.

If you would like to become more involved in helping the the Skeena system remain strong for future generations, please become involved and support the organizations below by: 1) signing up for their email newsletters and social media pages; and 2) making a generous charitable donation to support their efforts in the region.