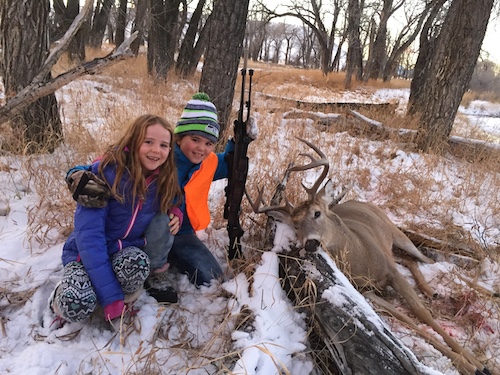 Finally, this boy found some time to get into the field. And the only way I did that was by playing hardball with my girls. Did they want to spend the weekend hunting? No way. They wanted playdates and sleepovers and all the things young girls should want and are fully entitled to request. But sometimes I don’t think you have to give them the answer they want to hear. Sometimes I think it’s about trying new things, about having to sacrifice a little, about doing something that isn’t your first choice and figuring out a way to enjoy it.

These girls get a lot. All week long I run them to basketball practice, or swim practice, or to band recitals, or to friends’ houses. I coach their basketball team. I cook their meals, I build their school lunches, I wash their clothes and sheets and help them clean their rooms, and I keep our house as clean as possible. I cook them moose sliders for their birthday parties when it would be a hell of a lot easier to buy pizzas. I’ve rented limos for them, rented play centers and ice rinks. I’ve sacrificed weekend after weekend so that they could swim in meets or play basketball tournaments. I’ve declined trip after trip after trip to fly fishing lodges located around the world, all so I could be part of their lives. And I wouldn’t change any of my decisions.

But this weekend I drew a line in the sand and said, “We’re going hunting.” The weather was favorable and we would be staying with friends in a wonderful house. This wasn’t exactly making them suffer. But it was cold. And there was snow on the ground. And one of my daughters didn’t bring any jeans to wear over her tights. And their mother didn’t set out the snow pants like she said she would (recurring theme that I won’t go into). 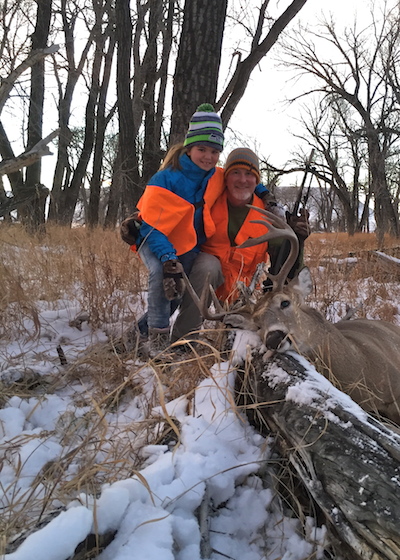 It felt like a team effort for sure, and this buck will be remembered as one of the most rewarding of my life. We’ll enjoy the meat from this animal all winter and each time I serve it we’ll be able to tell stories about the hunt and fair chase, and following up and finding an animal. All the key lessons of ethical hunting.

So, there were some demands and challenges. But overall, the girls took to hunting really well, both of them preferring to be in the field with me instead of sitting in the truck playing the iPad. In fact, one of my daughters kept saying, “Yes, I’ll go out in the snow again because if I don’t go you’ll probably get something. And I want to be there if you get something.” She is also the one who said, midday, “Do you have to hold out for a really big one? Can’t we just shoot any buck we see? I can’t explain it but now I  really, really want to get something today.”

We held out, best I could, and still got a nice buck right before dark, the two girls sliding through the snow behind me as we edged up on a deer. I shot offhand and felt like I made a good shot but 20 minutes later, after scouring the area with the girls, we still hadn’t found the deer. Not even a speck of blood. I told the girls, “I may have missed,” but they said they saw the same thing I did: the deer stumbled slightly after the shot.

We recreated the event and performed ever widening circles while searching for the deer. And then, finally, as we walked out of creek bed I almost stepped on the buck, which was piled up on a log, not 30 yards from where it had been when I shot.

We took a couple minutes to remember the scene and to say some thanks for getting the animal. Then the girls helped me drag the buck out of the woods. Then they held hooves while I dressed the animal. One said she gagged four times. The other said, “Cool, is that the heart?” They both said, “Oooh my gosh,” when I set aside the liver. I told them to keep their eyes open for grizzlies and I meant it. We had bear spray at the ready. And I had a round in the Model 700 .300 WSM. It was all wild-eyed exciting for them.

Once we had the deer in the back of the truck and were headed to town I heard some great words: my eldest daughter said, “I want to do this again. I want to shoot a deer. I want to take the hunter safety course as soon as I can.”

Next year, with any luck, we’ll be back in the woods, this time with one of the girls trying for a buck, as I just take it in.