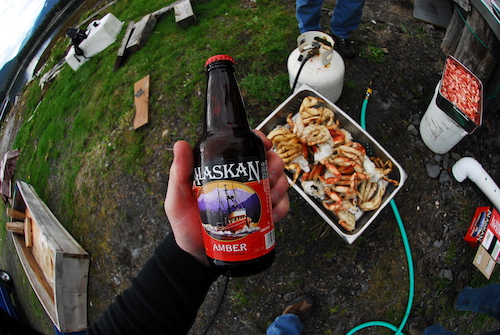 This is great news for those of us who treasure Alaska’s salmon, equally for its table quality and fighting ability. That goes for halibut, blacked, lingcod, and other species, too. This report tells us that it’s safe to serve Alaska’s seafood to our friends and families, which is exactly what I plan to do this holiday season. If you want to throw a tasty hitch into your holiday meal plans, swap out that ham or turkey (boring) for a wild Alaska sockeye fillet and some Dungeness crab. Match it with a big green salad and a few Alaskan Ambers and you’re sure to put on a good holiday party.

Here’s more on the report, courtesy of Fisherman’s News: Study reports released Nov. 30 by the state of Alaska say testing continues to confirm that the quality of Alaska seafood has not been affected by the 2011 Fukushima nuclear disaster.

In the wake of the earthquake and tsunami that rocked Japan on March 11, 2011, damage caused by the tsunami produced equipment failures at the Fukushima 1 Nuclear Power Plant. That damage resulted in three nuclear meltdowns and releases of radioactive materials beginning the following day, prompting wide spread public concerns about potential impacts on Alaska seafood.

Testing in 2015 continues to confirm that the quality of Alaska seafood has not been affected, with all tests showing “non-detect” for radionuclides associated with the Fukushima nuclear disaster, the Alaska Department of Environmental Conservation said in a statement.

Nuclides are individual atoms within an atomic species in which the atoms all have the same atomic number and mass number.

The Alaska Division of Environmental Health, within DEC, has coordinated with the state’s Department of Health and Social services, and other state, federal and international agencies and organizations to address continued public concerns.

DEC’s Fish Monitoring Program and Food Safety and Sanitation Program developed a plan to collect and test representative samples of Alaska fish species that spend part of their life cycle in the western Pacific Ocean and are important to commercial, sport and subsistence fisheries.

Results of the 2014 tests on Alaska fish showed no detection of Fukushima-related radionuclides Iodine -131, Cesium-134 and Cesium-137.

Because scientists had predicted the concentrations of radionuclides in the North Pacific waters could peak in 2015, DEC continued sampling this past summer, with testing that again found no Fukushima-related radionuclides.

These data, along with modeling and monitoring data from multiple agencies and organizations, continue to show fish from Alaska waters are safe from radionuclides related to nuclear reactor damage in Japan, DEC said.

Water quality data from a 2014 crowd-funded project spearheaded by the non-profit Cook Inletkeeper in Homer also appears to support this conclusion. Scientists at the Woods Hole Oceanographic Institution in Massachusetts, also tested along the Pacific west Coast and found no levels of concern, DEC said.