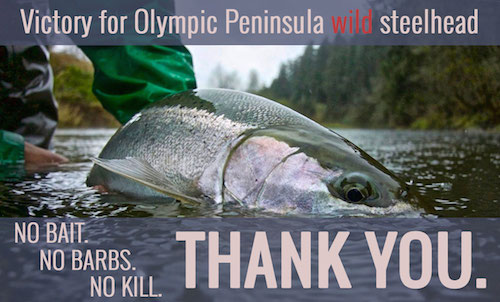 If you follow this blog and my writings in other places, you know that more than anything I love wild steelhead. Love the country they live in, love their life history stories, love the way these fish fight, and I also love that they are not the easiest fish to find or catch, which brings the challenge/reward factor into major play. If I could manage all Pacific Northwest steelhead fisheries, I’d completely restrict the harvest of wild steelhead on every inch of every river. Unfortunately, there are anglers who wouldn’t even fish for steelhead if they couldn’t eat steelhead and a lot of those dudes fish Washington’s Olympic Peninsula. Fortunately, a decision was just made that should benefit wild steelhead on several OP rivers that have been vulnerable to harvest of wild steelhead, including some of the big natives that make the area famous. Who doesn’t remember this miserable harvest of this giant fish on the Hoh, just a few years back. Killed for what reason? Because the angler wanted a “skin” mount. This new ruling should restrict some of this senseless kill. Following is the announcement from the Wild Steelhead Coalition, a group that worked very hard for these protections. Here’s why they worked so hard. 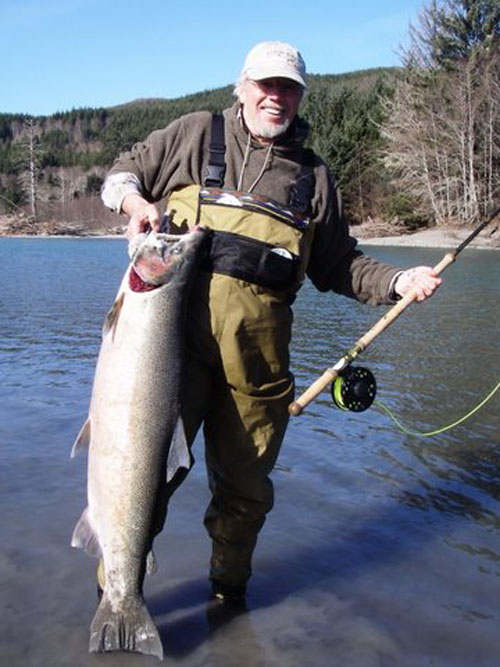 English Pete and his colossal Hoh River steelhead that he whacked on the head so he could have a skin mount placed on his wall. New regulations should restrict this type of harvest.

From The Wild Steelhead Coalition: In the world of steelhead conservation, victories can be as elusive as the fish we pursue. Like our success on the water, these conservation wins are hard earned and the result of dedication, perseverance, and countless hours of work. So on days like today when our resolve is rewarded, the victory is as sweet as catching a fresh 20-lb chrome-bright wild winter steelhead.

For the last three years, the Wild Steelhead Coalition (WSC) has been proactively pushing for a suite of prudent, forward thinking changes to Washington’s sportfishing regulations that would protect struggling steelhead populations on the Olympic Peninsula (OP). Thanks to the hard work of concerned anglers and the wisdom of the Washington Fish and Wildlife Commission, today these proposals became a reality.

Prohibit the harvest of all wild steelhead and rainbow trout on select OP rivers such as the Hoh, Bogachiel, and Sol Duc. WSC has championed a zero sportfishing harvest policy for more than ten years, and this adopted proposal is the final piece of a decade-long fight. Harvest by recreational anglers may be limited compared to that of other stakeholders on the OP, but this rule will reduce our impact and set a powerful precedent for others to follow.