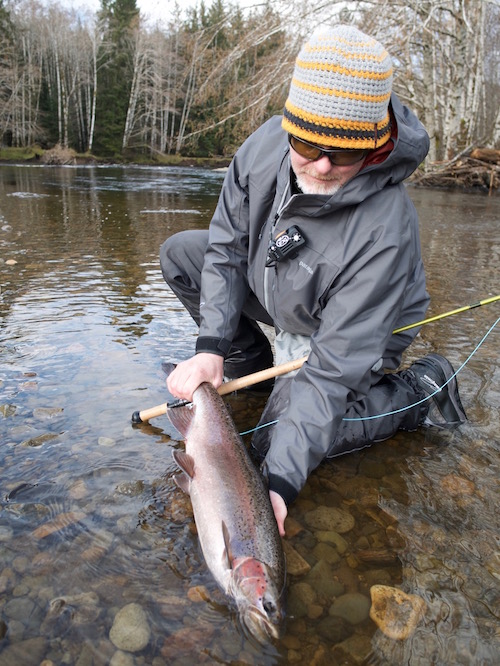 One of the most remote steelhead outposts on earth is Haida Gwaii, which consists of two magical islands off British Columbia’s northern mainland coast. I visited the islands several years ago and vowed to return. Last week I made good on that promise.

These islands aren’t well known in the steelheading circles and,
in fact, prior to the trip, when people asked where I was going in British Columbia, they asked the predictable questions—Bulkley? Skeena? Copper? Vedder? Squamish? Etc. When I told them Haida Gwaii they raised their eyebrows and said, “Say what?” 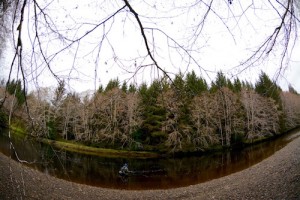 This is a dream run on one of Haida Gwaii’s numerous steelhead streams.

Haida Gwaii isn’t an easy place to get to and the chances for success are dependent on the forces of nature. To reach the islands you have to fly there from Vancouver or you sail from Prince Rupert on BC Ferries. Just an eight-hour cruise. To fly to the islands you’ll want to take Pacific Coastal Airlines, which services all the major steelhead destinations in British Columbia. In this case the service takes you from Vancouver’s south terminal to Masset, in just two hours. Once you reach the islands you have to figure out how to get around, and unless you run with a lodge, that means renting a vehicle. Renting a vehicle isn’t a cakewalk either because most of the outfits won’t let you take their rigs onto the nasty logging roads that dominate the transportation system. You will have to sign a form agreeing that you’ll pay a thousand dollar fine if you even get a flat tire. You also should know that fuel is not always available in some of the smaller towns and villages so, depending no where you stay and how far you drive each day, you might find yourself tied to town waiting for a fuel shipment. You also have to find a place to stay and renting a house, or a simple room, will cost you a hundred bucks a night. 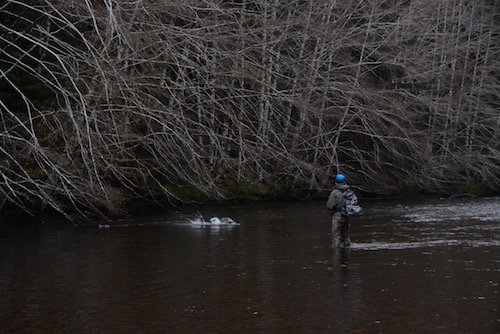 Through the woods and under the trees. We had some technical casting to perform before we could hook up with steelhead resting under the limbs. Whoever comes along and mines for flies during lower water will find a treasure trove. Still, when our casts hit the mark the metalhead were willing to grab.

Once you figure out travel and accommodation you have figure out where to fish and most of the streams are almost completely hidden by dense forests. There are bridge crossings for sure and if you are not intimately familiar with the area, that’s where you’ll fish, hiking up or downstream all day long, learning the best runs as you go. Don’t expect to get local advice. Just like 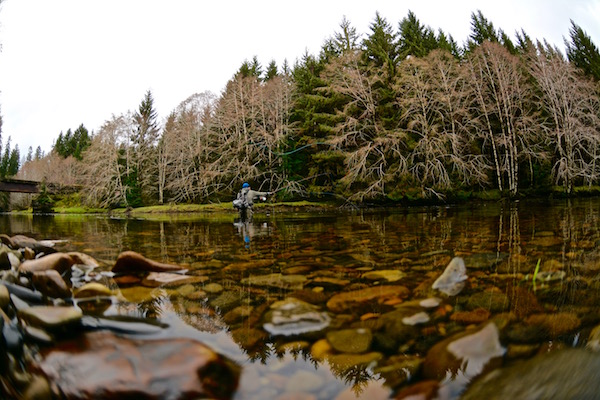 A dreamy rainforest landscape. A bunch of grabby and large steelhead. Very little angling pressure and a week to get ‘er all done. Dreams are promised and often fulfilled on Haida Gwaii.

steelheading everywhere, the locals are pretty tight-lipped and the lodges aren’t going to promote solo dudes who only add to the competition. Tackle shop? Good luck. Bring everything you need including spare rods, heads, leaders, flies . . .  everything. 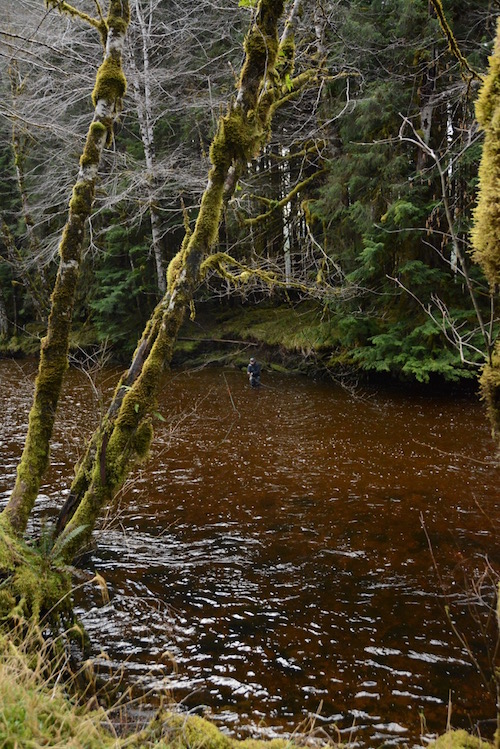 Rainforest fishing for steelhead on a smallish island stream. And, yes, I am throwing at two large steelhead sitting in relatively shallow water.

Now, if you’re saying I’m not up to all of that, realize that this is a steel header’s paradise, a trip for those who are spry and have time to figure things out. A week? Maybe. Two weeks? Yes, perfect. You’ll find good water, and likely catch a lot of fish . . . unless it rains hard.

During this visit we found perfect conditions the first three days and had a blast hooking up to six metalhead a day, on the swing, of course. But when it rained hard overnight and the rivers spiked, we couldn’t get the fish to take, even when we could see them in some of the runs. Purple. Pink and white. Orange. Black leech with an egg head. Chartreuse. Every color combination imaginable and no eats. Tear your hair out frustrating. So get this: even in steelhead paradise you fish through the marginal times to hit those windows when everything seems right in the world and you don’t have to keep asking yourself if, instead, you should pick up golf. 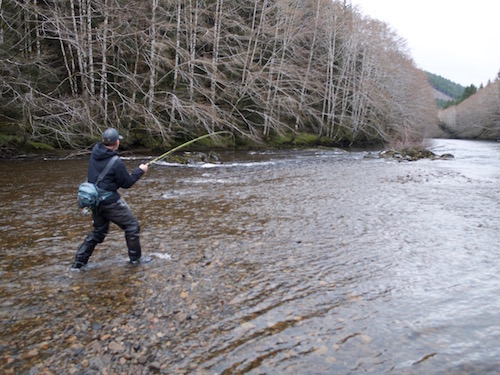 Mega beast headed downstream fast. The island’s steelhead, even the small streams, average between seven and 12 pounds and plenty of fish to 18 or 20 exist.

Size-wise these fish are the kind you dream about. No wimpy kids here. Most of these fish are three and four-salts, meaning they’ve spent that many years in the ocean getting fat and happy on an abundance of feed. The average fish goes seven to 12 pounds. We caught a couple nearing 16 or 17 pounds and we saw one legit 40-plus fish during high water, one that we couldn’t force to eat a fly. Some of these fish looked close to the spawn. Others were bright, relatively fresh from the ocean. All were strong. One fish took me way, way, way into the backing and I thought, three times, I would lose it in a mass of logs. Once, this fish headed downstream big time, tempted to run all the way through a rapid and into a lower run and if she’d done that I couldn’t have followed. But I backed off the tension and let her swim upstream, then hit her again and finally landed her on a mid-riffle gravel bar. One of the best fish fights of my life, honestly. Another British Columbia memory that will last forever. Just what you are looking for on a great fishing trip. 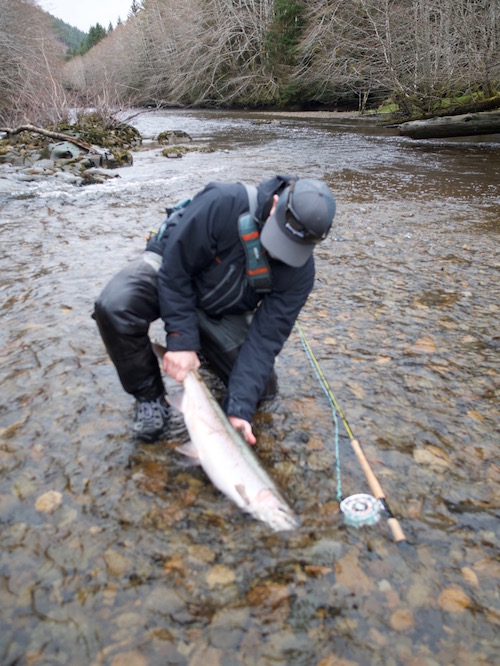 This would be considered a slab on any river on earth. This fish, perhaps 15 or 16 pounds, is not an exception on Haida Gwaii. Most of the fish are three and four salt fish meaning, in common terms, that they are big and they challenge an angler and his or her gear.

All of this fishing takes place in a massive rainforest that, despite being heavily logged, still gives these fish what they need. Walking through the forest to the river is like going back in time. Sasquatch? Maybe. The largest black bears on earth? For sure. So you keep your eyes open and your mind is on alert at all times. Blacktail deer slither through the forest like ghosts. You see their sign everywhere but you never see them in the forest.

When not fishing you’ll have time to check out all the native art this island offers, massive totems, unique sitting benches, individual works on the sides of houses and elsewhere. The 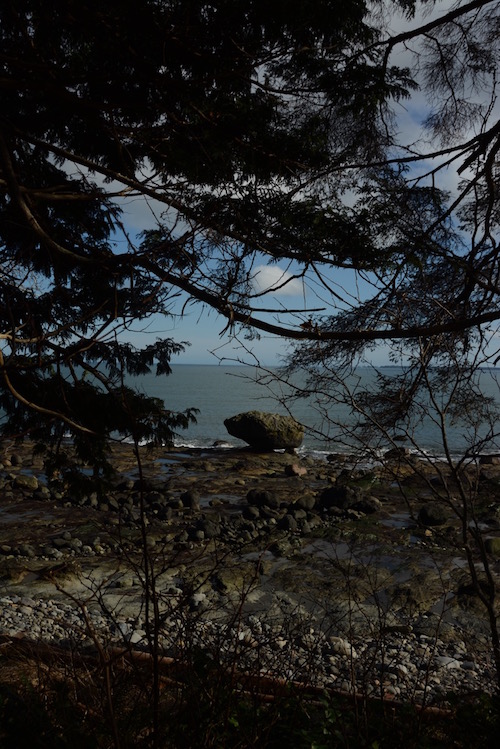 Balanced Rock is just one of hundreds, if not thousands, of unique attractions that compliment your fishing time on Haida Gwaii. Prime time for steelhead runs from November into mid-March.

Haida live here and they are known as some of the most inventive and creative artists in the world. You can see many of their best works at the Haida Heritage Center in Skidigate. 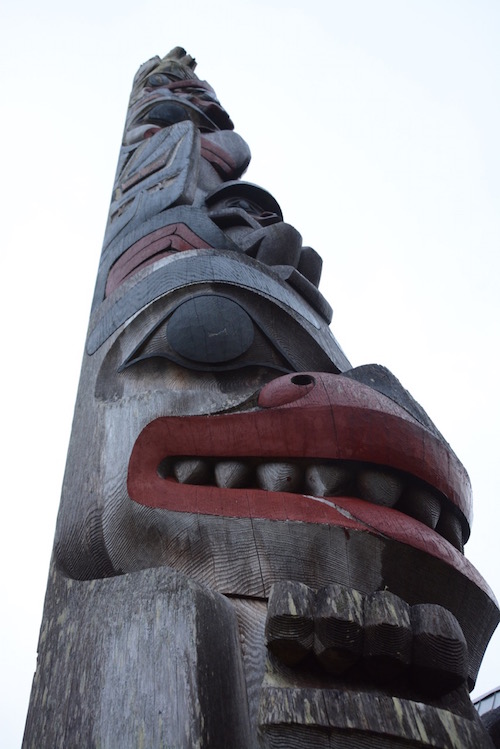 Part of Haida Gwaii’s draw, for me, is the opportunity to check out and even purchase native Haida art. As you cruise around the island you’ll see examples like this everywhere. Haida artists are considered to be some of the best in the world and I certainly agree. Jewelry. Totems. Paintings. Smaller carvings. Beads. All outstanding and there for you to enjoy.

No matter how long you spend on Haida Gwaii, you’ll probably leave feeling like you weren’t there nearly long enough. During this trip, a friend and I almost changed our flight plans. It was the second to last day. The river was still raging high. The fish were probably off the bite. But the river was dropping fast. The forecast called for clear skies the following day. The river would go down further overnight. The fish would be feeling good, grabby for sure. We now had the best runs dialed in. We’d cream them for sure. But back at home both of us had kids waiting. Next time. Next time, two weeks. During a stint of clear weather, preferably arriving at the peak of a spike, fresh fish coming in, river dropping for sure, and everyone feeling grabby. Next time, for sure, and now with a year to revisit some of the best days of our lives. 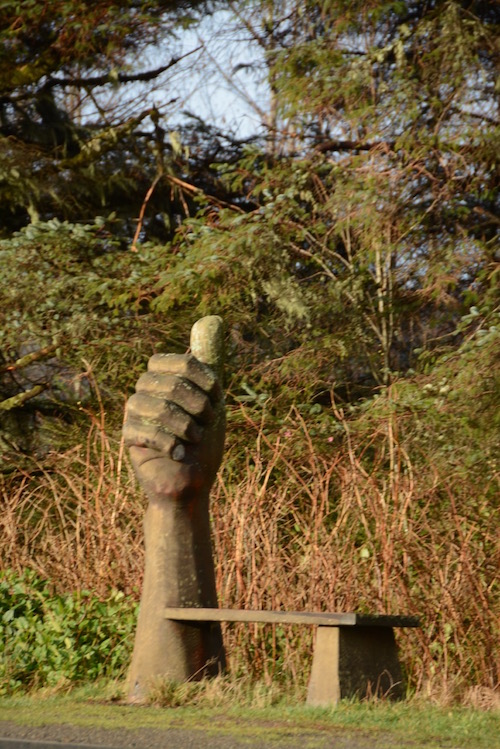 When your on Haida Gwaii, even when the rivers blow out and the fish play hard to get, it’s all good, as this roadside bench indicates.