Hatch’s $100 Nippers and Simms’ Quick Stash Lanyard . . . until death do us part 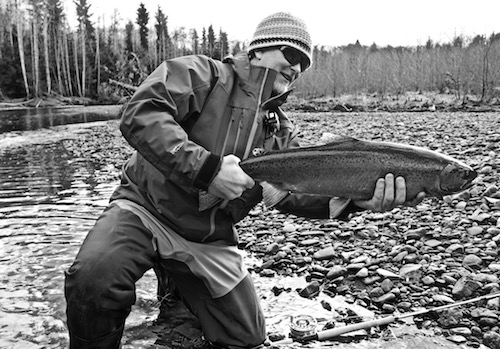 The question isn’t whether paying a hundred bucks for a pair of nippers is worth it. The question is how are you not going to lose them after you fork out the dough.

Hatch’s nippers come on the heals of Abel’s fancy nippers, which debuted around 2006 and seemed very expensive at that time. Hatch introduced its hot rod nippers in mid-2015 upping the ante in spades. I was able to secure a prototype at the ICAST show in Orlando last July and have been snipping tippet and clearing the eyes of hooks with them ever since. And, trying not to lose them. I was so worried about losing them, in fact, that I called SIMMS and ordered its Quick Stash Lanyard ($29.95), which is a lanyard with multiple attachments, all attached or detached via a magnet.

The lanyard comes in black or blue, and for reasons I’ll divulge in a moment, I’d go with blue. Nippers, Gink, and hemos attach directly to the lanyard, giving you all you need right under your nose. No twisting around a pack, or digging through pockets, to find your essential and most oft-used tools. 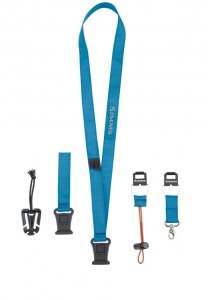 Now, unfortunately, I must tell you a sad, sad tale, the death of my nippers and the lanyard, all occurring on a recent trip to British Columbia for steelhead. It went down this way: GT makes a cast to the far bank. GT hooks tree with his fly. GT finds it too deep and fast to wade to the fly and remove it. GT pinches line to cork and backs away from the tree, expecting the fly to break free or the limb to break, either case giving the fly back to its respectful owner. GT gasps in surprise when the running line, rather than his tippet, snaps and his entire shooting head flings into the birch on the far bank. GT ponders past transgressions and karma before deciding that he might wade the river, downstream, to reach the other bank. When doing so GT realizes that wading into water that raises within an inch of the top of his waders and gives the sensation of flying rather than wading, is not a great thing to do when you are responsible for two young children. GT thanks lucky stars when he reaches the far bank. While performing a nasty bushwhack, GT is nearly strangled by a stand of young spruce trees. When GT reaches the tree with his line in it, he realizes that trying to wade out to reach the line would cause immediate death by drowning and that, in fact, even trying to climb down a mud cliff to the water would be suicidal. Fishing partner on safe bank urges GT to wade in. Instead, GT grabs a gnarly limb from the forest and hucks it at the line, while listening to his partner—a smart ass standing on that safe bank, who says “You’re crazy! You aren’t going to hit the line.” Limb connects with said line and flies out of the tree, landing in the 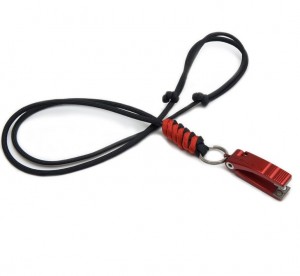 fast river, midstream. GT takes off through the forest again, screaming fast like Little Red running from the wolf, while Smart Ass stumbles down the safe bank. In the end, GT reclaims limb and running line in the middle of the river, right where he crossed it previously. Smart Ass forms a loop on the running line, GT reconnects the 480-grain shooting head, and fishes happily after for six straight days with said running line, head and a Sage 7114 Pulse. Everything is once again Rosey in GT’s world until he realizes that Quick Stash Lanyard and killer Hatch nippers are now located somewhere on the opposite bank, likely in a nasty snarl of youthful Sitka Spruce. He decides that retrieving your only 480-grain head, which is essential for your week of steelheading with a new rod, is permissible, and worth risking life for, but wading that beast again for nippers and lanyard is insane. So now, in a little patch of spruce on the banks of a river on Haida Gwaii, my nippers and lanyard rest. Question: If nippers fall in a forest and nobody sees it, does it make a sound?

What’s the moral of the story? I don’t really know, except to say that these nippers and the lanyard are sorely missed. They are both great products and I will lament their deaths. Does this mean you shouldn’t get these items? Hell no. Get them, with this warning. Tuck that lanyard into your waders or inside your shirt when bushwhacking. Get blue so if the lanyard does come off, you might find it. And make sure that if you do lose your nippers your fishing partner doesn’t own the same nippers. On this trip, after I’d lost my nippers, repeatedly, Smart Ass showed me his new Hatch nippers and expounded on how well they worked, over and over and over and over again.

2 Responses to Hatch’s $100 Nippers and Simms’ Quick Stash Lanyard . . . until death do us part