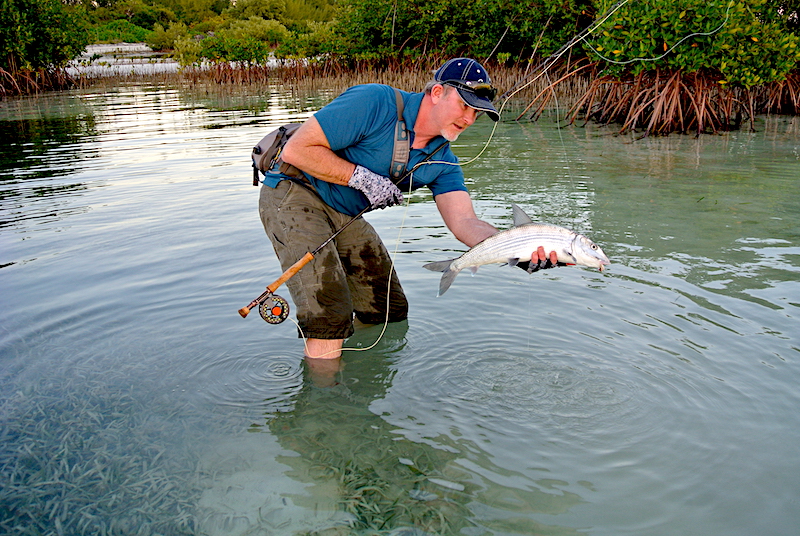 Honestly, some days I don’t care if I catch another trout in what’s left of my lifetime. I’d rather row, let someone else do the dirty work.

I say that, however, knowing how my eyes and brain process a rising trout; I go into predatory mode, like I’m hunting deer and elk, ready to stalk a fish as if my life depended on catching and eating it. So I haven’t written off trout, but after catching so many of them over the years, in every imaginable situation, those fish aren’t a priority. Which brings us to salt.

Never wanted to fish saltwater. I saw high western mountains as a necessary part of the fly-fishing equation. Idaho, Montana, Washington, Oregon, British Columbia and Alaska? Yes. Flatlands and a featureless ocean? Not a chance.

And then my father and I took a redeye to the Florida Keys. We landed in Marathon and a couple hours later we were motoring out of a cut, with flats spilling away on either side. My father and his friend, Mark, stood on the flying bridge as sentries—yes, we were in a 28-foot cabin cruiser. I spotted a few fish to the right and asked, “What are those?” Mark yelled, “Tarpon,” and I made a cast. One of those fish peeled away from the others, raced to the fly and grabbed it. A few minutes later I had a 25-pounder in my hands and thought, This is easy. I didn’t land another tarpon for two years. I hooked plenty during that timeframe.

What not to like? Warm weather, crystal clear warm water, and the thrill of seeing giant tarpon headed toward the bow. Daisy chains. Frigate birds. Manatees. Sharks and sea turtles. Sails and marlin. Evenings on the deck under palm trees, eating fresh mahi and key lime pie. Chumming nurse sharks in the cut and casting to snook underneath sailboats. Cigar runs to Key West and feeding the “pets” at Robbies. Life was good here, laid back, and it seemed like a place I belonged. I started shopping flats skiffs. Considered guiding. Pictured myself as a tan tarpon junkie—a conch—casting on the good tides and writing the rest of the time.

I would have done it. But I didn’t want to be away from family . . . that much. Since that decision, I’ve been able to fish the flats a few times, but never for the duration I’d like. Six days on the salt flies by in record time. There’s so much left to explore—I haven’t fished for sharks on the flats, nor landed a permit; I haven’t caught a 10-pound bone and I haven’t even hooked a sailfish, let alone a marlin; cobia, king mackerel, black drum and tripletail beckon.

The point is this: If you’ve avoided the salt, thinking it’s too much to take on and that trout suffice, just keep an open mind. Many of the stories in this issue focus on salt opportunity and you don’t have to own a fly shop to enjoy these experiences—most high-end operations provide gear if needed. And DIY always is an option. So buy that plane ticket. Grab some flies. Bring an eight-weight and a burly reel. Rent a boat or kayak. Paddle out from shore. Enjoy the ride if you hook Mr. Big. And remember what Melville wrote: “At sea a fellow comes out. Salt water is like wine, in that respect.” —Greg Thomas

This entry was posted in Saltwater. Bookmark the permalink.

One Response to About Salt