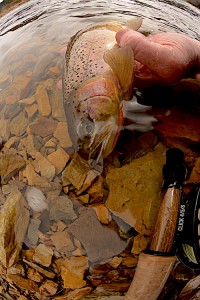 We’ve been told to stay at home, but we can access public lands. A mixed message for sure. All I know is that I can avoid all human contact if I just steer my truck to the river and hike into a remote portion of a river.

And that’s what I did yesterday on upper Rock Creek, which is located about 60 miles from Missoula, Montana. I was hoping to hit the creek earlier in March, knowing that this has been a mild winter and early spring and that the creek’s rainbows may have already moved toward the spawn. Wanted to catch that prime window when the cutthroats, browns and ‘bows are all in the main portion of the river and looking up for dry flies.  Didn’t happen.  I was there yesterday and yesterday was too late . . . at least where I fished.

In the past I’ve raised fish after fish for bulky dries, matching adult skwala stoneflies, but yesterday they wouldn’t eat anything but a nymph and the rainbows were totally MIA. I caught a few browns and a few cutthroats, and I manhandled a couple fat whities, but it wasn’t stellar fishing.

What’s next? I’ve got a few runs on some bigger rivers that have produced in the past, like big time production. But, will I be too late on those stretches, too? I may not get a chance to find out. The thing about those stretches is that they are best fished via a drift boat or raft while the angler chucks streamers to the banks. And right now, I don’t think you can launch a boat or raft with any hint of complying with the rules stated by our governor—to maintain six feet apart of anyone you aren’t living with. Come on. The rower’s seat is about two feet from either the front or back seat of the boat. I saw a lot of rafts headed places yesterday and wondered aloud . . .those people probably don’t live together.

Anyway, unless one or the other of my daughters miraculously decides to row a boat this coming weekend, I won’t be floating. So, unfortunately, my favorite fishing of the year is  victim of the virus.

You could argue that leaving the house to fish is leaving the house for less than a vital reason. But there is something to be said for sanity, and a fresh mind. As long as I pose no threat to other people, and I don’t touch anything and I remain more than six feet from other people (not hard to do on the water) I will go as often as needed, with Clorox wipes and sanitizer at the ready . . . just in case anyone pets my dog.

This entry was posted in Culture, Montana, Uncategorized and tagged corona virus, Montana. Bookmark the permalink.