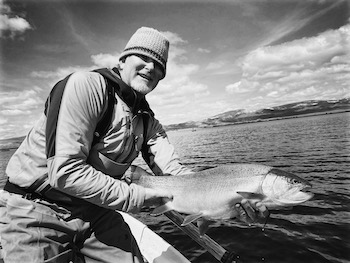 Sometimes it’s better to be lucky than good.

Launched the boat the other day, rowed 50 yards away from the put-in and was stripping line from the reel when it dug into a gap in my old prototype Hatch and sliced in half. That’s when I remembered having done the exact thing several other times. What to do? I used a blood knot and secured the two ends and cut off the tags and made sure the knot would skip through the guides and, bam, I was back in business. Ok, so I wasn’t making record-breaking casts, but who needed to—I could cast, let out more line and troll.

Trolling isn’t the most romantic way to fly fish, but it sure pays dividends when you are prospecting a lake and don’t have electronics. So that’s what a friend and I did—we stripped out line and started to cruise the lake. About 10 minutes into it I hooked up and we quickly landed a four or five pound rainbow. There were other boats around and I had to imagine them saying, What the hell? They just started. 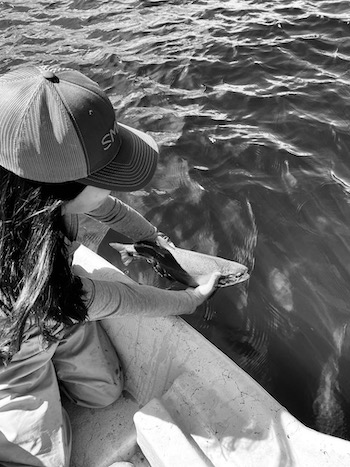 Just a small one here.

Thing is, I only saw two other people with fish on that day. And there were about 20 people fishing the lake. After releasing that fish we let out our lines again and about 15 minutes later I saw my rod tip jerk down. I grabbed the rod but the fish was gone. As I was doing that, my friend grabbed her rod and said, “I’ve got one.” We were laughing and yelling and I’m pretty sure we were driving everyone around us just a little crazy. And it got worse—after a solid fight my friend slid her fish into an undersized net and we realized what she’d caught. A brute. A tanker. A beast. I immediately told her that she’d landed a trout over 10 pounds. And as I’ve looked at the photos even closer, I up my estimate to 12 to 14 pounds.

That’s because I once helped Idaho Department of Fish and Game sample cutthroat trout at Henry’s Lake and I remember a fish that we weighed at 14 pounds. This rainbow that my friend caught was bigger. We took a couple quick photos, gave some knucks and a few whoops and then set out our lines again. The people around us weren’t exactly happy about it. I’m sure they were wondering which fly we were using and would have paid well if we’d had some to sell. I told my friend, “No matter how long you fish for trout in Montana, you may never land a larger fish.” 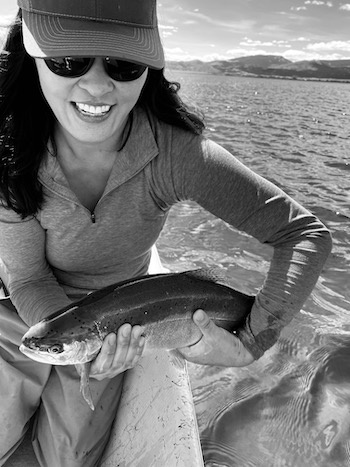 Anyways, we cruised around a lot of the lake that day, picked up our four fish in a pretty confined area and learned that the rest of the lake is a bit shallow and muddy and maybe not worth the effort. We did anchor over some weedbeds and I was able to pick up a final fish . . . on what I had already said would be the last cast of the day.

If you are out on the lakes right now and want to give yourself the best shot at success, try trolling with weighted lines and a fly that any trout would be happy to eat. My top choice when doing  just that is a mohair balanced leech.  Try to find deeper water between or on the edges of weed beds and work those areas thoroughly. Watch the water for what’s hatching—in the West right now there are a variety of bugs coming off, including chironomids, damselflies, and Callibaetis mayflies. If fish aren’t taking on top, make sure to go under with nymphs. And don’t be afraid to cast directly over the weedbeds on occasion—trout also cruise right over the tops of the weeds. Give it a try. See what you come up with. Maybe you’ll be as lucky as we were. —Greg Thomas, @anglerstonic