Adventure: The Wind Rivers and a Mexi-Shack Miracle 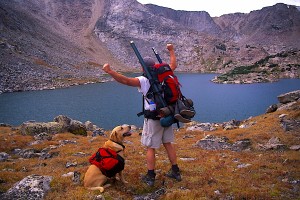 The last time I tried to survive on trout for a week, a major summer storm blew into the mountains and temperatures dropped below freezing. A three-season tent and a down sleeping bag kept me alive, but a trio of mountain lakes I’d targeted grew sheets of ice and the cutthroat trout swam deep.

I’d planned on eating fish and I’d planned for nothing else. Unfortunately, in my family hunger is the forbearer of Irish temper and I could feel the anger rising from my body to the brain. Damn it, I raged, this had to be somebody’s fault!

When that storm broke and I finally reached the trailhead I was so hungry and spiteful I considered eating the signpost. I think it’s that way for most people. In the mountains, when working hard and eating little the pleasant-veil becomes transparent. Hunger doesn’t lie. Challenge and an empty belly draw savagery from the soul. And, be warned: if you’ve seen it in the mountains, you’ll encounter that beast again, hopefully not in public, say, at the grocery checkout lane.

It would be difficult to find, even among the most ardent calorie counters, someone who wouldn’t dream of the dangerous cuisine after a couple nights on the ground, let alone after a weeklong trek in the summer heat, spent surviving on trout and trail mix. When ending an extended backpacking trip, especially when narrowing distance to a trailhead, my universe contracts to each tired, dusty footstep and a flock of gravy-slathered chicken-fried streaks orbiting around my ears. It’s a greasy apparition. It’s death on a plate. I can hear the doctor’s orders and still I can’t say no.

I can tell you, pan fried trout suffices for two nights. After that the stomach starves the mind of independence. When those cute little camp-robbing chipmunks resemble five-star meals, it’s a good time to get out of the woods. I’ve been hungry enough to eat squirrel and mad enough at their chatter to have killed for sport, but I’ve staved off that inclination because, even famished, I can’t forget that a fluffy tail is that rodent’s single separation from the rat. Besides, those little suckers are fast.

I considered the squirrel option in Wyoming’s Wind River Mountains. I’d been in for almost a week with a girl I’d recently met. We’d entered the Winds to catch the world-record golden trout and we’d failed miserably in that pursuit. We fished lakes which, according to the biologists, contained five-pounders and possibly the world record. In the end, after five days of hard hiking and dedicated fishing our tally stood at this: one six-inch golden trout. The world record golden, I’m embarrassed to admit, weighed 11 pounds. We caught, killed and ate a few cutthroat and brook trout, but the menu grew pale. Worse, two sweet-tooths had run out of their candy-bar stash. It was looking like trout, tubers and berries the rest of the way.

One day in the Winds, at the end of another fruitless day chasing goldens, I discovered that my friend had concealed a Baby Ruth bar. I found the wrapper and some chocolate slivers hidden under her sleeping pad. I formed a jury of one and conducted a hasty trial. The crime: fraud, punishable by desertion.

“You had another Ruth,” I mentioned while displaying the crumpled evidence. “I can’t believe you wouldn’t share.”

“I called, I guess you didn’t hear me,” she lied. Her wildly curled, raven-black hair was a gnarled mess from sleeping so many nights on the ground. It rose from the sides of her head in confusion and stood in defiance of gravity. Imbedded with twigs, leaves and half a peanut, it was one scary sight. I swear she could have straddled the nearest stick and taken flight. “That treat,” she continued, “was at the bottom of my pack. You walked away from me to fish. You didn’t wait for me to gear-up. I was hungry. What was I supposed to do?”

We were camped in a rock-walled natural amphitheater, spires protruding overhead. Sound amplified as crisply as heard at Red Rocks or The Gorge. When lightening cracked overhead we covered ears so our brains wouldn’t shatter. I could have been on the other side of the lake. A squirrel could have squeaked. I would have heard it, followed its patter, and killed it.

“You are so full of it,” I exclaimed. “You sing like a crow. How couldn’t I have heard you?”

“We’re starving,” she spat with sudden resolve. “We catch trout, but you let all the big ones go! And when we keep a couple of dinks you cook them like my father.”

“He doesn’t,” she hissed. “But his meals taste better than yours. Trout without flour. This is a joke.”

I slinked away from camp and sat on a rock above the barren lake. I found comfort, momentarily, in this thought: hunger, like life, is a temporary condition. Still, my stomach twisted with a squeal and dizzying pain shot all the way to my eyes. I closed eyes and rose into space viewing the entire pathetic Baby Ruth spectacle from above. And still I missed the message.

Sometimes you learn great things about people when hunger could incite the worst. I noticed that not long ago after a 14-hour day spent chasing steelhead in Idaho, under clouds that dropped rain, sleet and snow. At the end of that day, 13 hours since our last meal, a friend, Dan, and I, headed for Challis. We were half-frozen and famished. A calorie-rich meal and a cup of coffee sounded like heaven.

We scoped out the reader-board at one restaurant and it promised a Ribeye and all the accoutrements for $16.95. Dan said, “Ribeye would be awesome,” but the smoke layer inside that restaurant defeated our intention. We walked a few yards away to the Y-In and perused a menu touting chicken-fried steak as the special. Dan said, “Oh, yea. That’s what I’m getting.”

Dan is a chicken-fried steak connoisseur. Once, in Three Forks, Mont., when he could have ordered from a menu offering marinated flank steak, scallops wrapped in prosciutto, or penne with fresh Copper River king salmon, he requested a 14-ounce chicken-fried New York steak, lathered in white gravy and topped off with homemade sausage balls.

In Challis, when the waitress arrived, she immediately cocked her head to the right, dropped her chin in my direction, and raised a pencil to her order book.

I said “Chicken-fried steak,” and closed the menu. As Dan tried to say, “Ditto,” the waitress intervened and, with no apology, hissed, “That was the last one.” I made eye-contact with Dan and felt the most wicked grin creep across my face. As the waitress walked away, death took a seat next to him. Dan’s eyebrows narrowed and he said, “I thought the world would end before a greasy spoon ran out of chicken-fried steaks.”

Dan refused my offer to switch orders. He said, “You were first. You’re hungry. You like chicken-fried streak. It’s yours.” In exchange for that graciousness I could only cough, “Uh, could you pass the pepper?”

One rule of the trail that you won’t find in any backpacker’s guidebook is that it’s not cool to speak about food on the way out of the mountains. To do so is taboo, like singing some cheesy love song on the way in. Either scenario creates an unshakable focus. Some people wield their suggestions like a sword. And that’s exactly what the candy-bar thief did on our trip out of the Wind Rivers.

“When we get out of here I’m having creamy chicken enchiladas,” she dreamed. “No, I’m having carnitas or asada,” she amended. “Wait, I’m having tortilla soup and a tamale. And a Corona with lime. Or maybe pizza.”

Certainly, I required food more than her. She ate like a bird. I outweighed her by 60 or 70 pounds and chowed like a hog. You could have balanced three of her on a pinhead and still had room for her pet tofu.

“You’re killing me,” I announced. “Could you just wait until we get there? Quit talking about food. I’m starving too. I can’t stop visualizing a wet red burrito.”

That silenced her for two-hundred yards and then she spat, “Dude, check this out. When we get out of here I’m going big. Chips, salsa and guacamole. Chile rellenos, beef enchiladas. Black beans and rice.”

Weakened from the trip and succumbing to fantasy I shouted, “Oh my God. The super-combo!” She’d ruined me.

After a couple hours of that jabber we reached the truck and crashed into a dilemma: where in Wyoming’s hinterland would we find a Mexican restaurant? We drove out of the mountains and into that sagebrush and rattlesnake infested country around Pinedale. Entering town, we spied a billboard professing, Beef, It’s What’s For Dinner. And it appeared so as we passed The Wrangler, Stockman’s, and Calamity Jane’s. Then, as we reached the end of town – after we’d resigned ourselves to pizza or a steak – a Mexi-shack miracle rose from the high desert.

Rain fell hard, an August thunderstorm. We charged the restaurant with hoods held over our heads. At the door we dug in our heels and paused, like a couple bird-dogs encountering a face full of skunk. Adjacent to the door was a screened window with a fluorescent-yellow sticky tape baton propped at an angle across the inside of the frame. I took a photo of that tape and later counted 121 big, black, nasty flies, in all states of decay, pasted to it. I pointed, and raised my brows. She shrugged, opened the door and calmly walked in for the massacre.

This entry was posted in Culture, Northern Rockies, Wyoming. Bookmark the permalink.