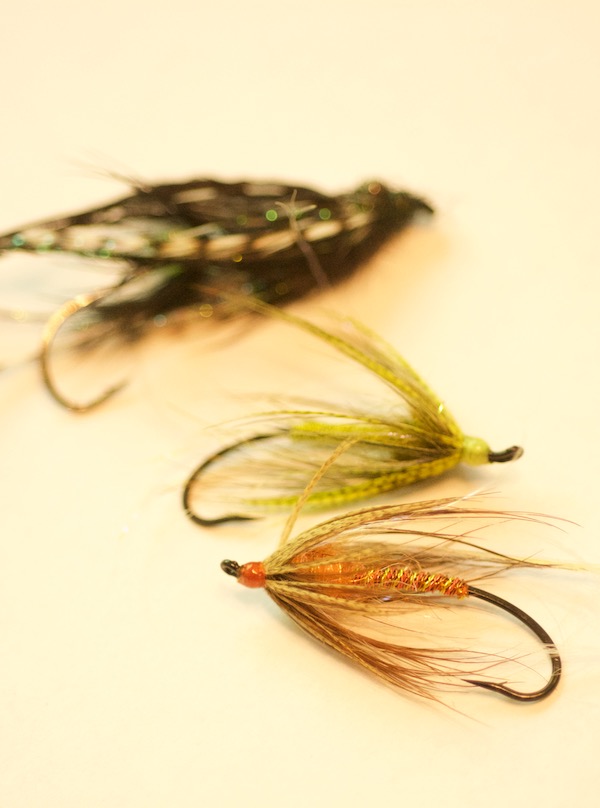 I was going to wait, and run this post later in July, but I’m starting to hear of some steelhead coming up for skaters on a few Columbia River tributaries and figured, Why not now? Here goes:

A lot of western steelheaders put their flyrods down during the heat of the day, especially in August and early September, choosing instead to pilfer the beer supply and follow their gluttony with a midday nap.

This follows the adage that summer steelhead won’t bite when bright sun is on the water and that the best times to get them are during mornings and evenings, when shadows cover portions of the water. That is only half true, and also throws sand in the face of a classic angling truth: You can’t catch fish if you don’t have a fly in the water.

Truth is, western steelhead do take during the middle of the day, but you probably won’t raise one to the surface at that time. Instead, these fish find deep runs, slots, chutes, and plunge pools. And they hold closer to bottom. Ironically this is what winter steelhead seek during low water conditions too. Summer steel also hold in the shadows that ledge-rock provides and that’s exactly what we look for when fishing western steelhead during late summer and fall. You’ll find plenty of this shadowy ledge-rock on Idaho’s Clearwater River, Oregon’s Deschutes and North Umpqua rivers, and you’ll see some of it on Washington’s Klickitat and Grand Ronde rivers, too. You’ll also find it in British Columbia, up and down Vancouver Island, and elsewhere.

Ledge-rock alone, however, won’t hold steelhead. It needs to be accompanied by water that’s at least four-feet deep and relatively slow moving, meaning walking speed or slower, which allows a fly to get low in the water column, something you couldn’t do in a fast moving mid-river seam, for instance. Don’t overlook shadowy ledge-rock even when it’s located between fast currents—just remember, slow, shadowy slots hold steel. 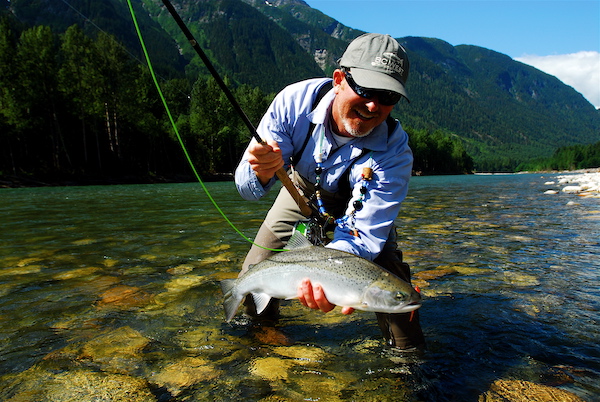 This may not be the biggest dude in the world—hey! The fish not the guy!—but they all count as one and it’s a wild steelhead so that is a bonus. Bright skies don’t mean you can’t catch steel, you just have to adjust tactics that you might use on overcast days. Fish early and late if possible, but don’t overlook midday because they’ll take at that time, too, if you can reach them.

To get a fly down to the fish you’ll need to attach a sink-tip to the end of your fly line, something that purists may scoff at. Well, we like to catch fish and to do so we’ll attach two or three feet of six-to 10-pound test tippet to the end of a sink-tip. Then we tie a fly to the end of the tippet and three of our favorite fall patterns are Montana Fly Company’s Sticky Sculpin (black), Umpqua’s Bantam (black and green), and Umpqua’s Tiny Dancer (October caddis or olive coloration). You don’t need some gaudy Intruder; subdued, natural colors and smaller sizes get answers here.

Don’t get rattled by all the choices in sink-tips these days. You can keep things simple by requesting Tungsten tips in just three sizes and weights. Tungsten tips quickly take a fly down to the fish during these bright-light midday hours and you can manipulate the sink-rate by casting at various angles across the water and mending line in various ways. Here’s all you need: 10-foot sections of T-8, T-10 and T-12. T-8 sinks at 6.5 inches per second; T-10 sinks at 7 inches per second; and T-12 sinks at 8 inches per second. Want to go deeper?Loop on some T-14, but don’t be surprised when you snag.

No matter which tip you fish, think low and slow. Steelhead often take a fly because it annoys them. Pick the choicest water and allow your fly to slowly swing through it, preferably near the bottom. If you piss off these fish, you may get a grab.

Oh yea, you’re right—you’ll lose flies while fishing near bottom this way. But you’ll also come up with some midday steelhead that your pals overlook while sleeping off their afternoon beer buzz and ignoring that ancient angling truth.