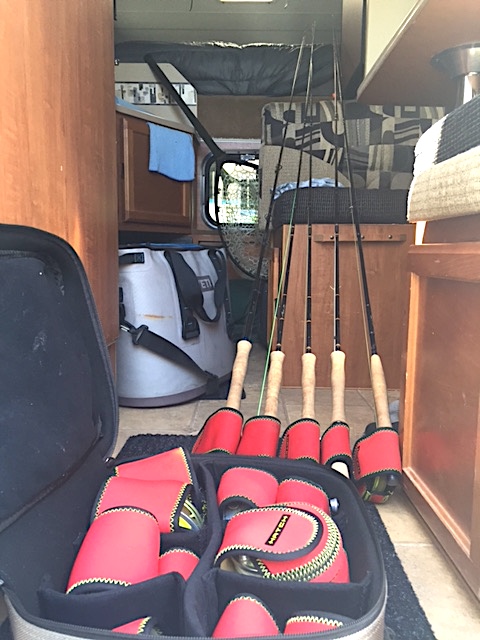 A friends arsenal, always strung in the back of the camper, ready to hit the river and throw. Yes, he’s got issues.

I grew up in an artist’s family, so when we spent on outdoor equipment it was all about the essentials and price point.

I rarely got what I wanted, but I did get the items I needed, meaning the clothing and gear to accomplish a goal, and survive.

This mindset transferred to my tackle as well. When I took up fly fishing in high school, I couldn’t afford the best equipment. So, I rifled through our sporting gear and kept my eyes open at garage sales. Somewhere I attained a Pfleuger Medalist reel and a 444 Cortland fly line, which I placed on a 9’ 6-weight Sage RPL fly rod. And how could I afford what was, at the time, one of the most expensive rods on earth? The answer: I couldn’t. Fortunately, my dad wound that rod into payment for having illustrated one of Sage’s earliest catalogues, and gave it to me as a high school graduation present.

I still have that rod. Always will. Every other rod is expendable, but that RPL will be with me until I die. That’s not the point.

The point is, I took that rod and a dilapidated reel to Alaska and landed a 50-pound king salmon and a 42-inch steelhead, among many other fish, on them. Because of that, for many years, I always advised people to spend their money on a rod first, and worry about a reel later. In fact, I advised people to avoid overpaying for a reel—all it does is hold your line, I said.

I held to that belief for several years. But over time, as I lost several memorable fish due to reel/drag failure (including a tarpon that may have been over 200 pounds), I came to appreciate a quality reel for several reasons. First, fishing is fun when you don’t have to worry about your reel seizing up, especially when you’re fighting a big fish, potentially the biggest fish of your life. Second, a smooth drag increases your chances of landing large fish, say a tarpon, permit or steelhead. And it’s essential when you must run risky tippet in clear water, or when fishing tiny dries off 6X for snooty trout. During the 1990s I was fishing south-central Idaho’s Silver Creek every day I could, and would have broken off most of my fish if I was using anything other than a high-quality reel with a smooth drag. And third, quality reel manufacturers now machine bomb-proof, sealed drag reels with great warranties that assure your reel will be fixed or replaced if it ever fails. Basically, when you buy one of the high-end reels these days, you should think about it as something you’ll use for the rest of your life.

In the end, I think about it this way—if I’d stuck with low-end reels, like that Pfleuger, for the past 30 years I’d have run through 50 of them by now, and probably wouldn’t have been very happy with any—at any point—when I could have just sucked it up at the start, forked out the cash, and bought the quality reel I wanted. The monetary investment in 50 Pfluegers, and the investment in a quality reel, would have worked out in the quality reel’s favor . . . and I would have landed some of those giants that got away.

That’s why I changed tactics in the 1990s and started “investing” in reels. I bought a Bauer for tarpon. I was awarded a Tibor for taking second place in the Jackson Hole One Fly contest. I snapped up a couple Abel’s on sale. And I begged Jack Charlton for one of his reels, but never convinced him that exposure was as good as free money. Now that some of those reels are auctioning for $15,000-plus, I understand his reluctance.

In 2005 I met John Torok. He was in a little booth at the back of the Fly Fishing Retailer Show in Denver, Colorado, eager to talk with anyone who might wander into the “Lost 40” where the newbies were located. A banner above him spelled out HATCH and he had just a couple of reels set out for the show.

I asked him how he got into the reel business and he told me the story about how he bought a high-end reel, went fly fishing in the Sierras, and watched the thing fall apart. He approached a San Diego-based machine shop and learned that the owner, Danny Ashcraft, also loved fly fishing. The two formed a partnership with a single goal: Build bomb-proof heirloom reels that looked great and “stopped fish in their tracks.”

I found out that Torok and I had a lot in common. He loves hunting and photography just like me. And we shared a similar “grab the bull by the horns” work ethic: His game plan for building Hatch reels relied on driving around the West, poking his head into every fly shop he could find, and building a rep and dealer network on his own. And that’s what he did.

After the show Torok followed through on his promise to send me a Hatch reel, and I fished that Hatch (a 5/6 Typhoon) for a couple seasons on the Madison when it seemed like every fish in the river weighed five pounds. The reel was great, with a super smooth drag that offered the ability to crank down on big fish. But it had a problem; twice, when I forcefully stripped line from the reel, in preparation to cast, the line caught in a gap between the spool and frame/line guard, and was cut in half. I reported the issue to Torok and Ashcraft. They quickly went back to the drawing board, solved the problem, and never looked back.

Now, many years later, Torok’s trade-show booths are always in the big-time isles and Hatch reels are now regarded as some of the finest, if not the finest, you can buy. They are as ubiquitous on freshwater trout and steelhead streams as they are on salt flats. I now own six of them, but that pales in comparison to a fish-junkie friend of mine who went all Hatch-in-the-head crazy and now owns 16 of them, all with multiple spools. Like many of us, he’s a practical “if it ‘aint broke don’t fix it” guy who, when he finds something that works, sticks with it.

It would be difficult to break a Hatch reel: They are fully machined, offer completely sealed, multi-disk drags, true equal weight reel handles and counter balances, and they carry a Type 2 anodized finish.

So, if you’re considering a new reel for steelhead or trout this fall, or bonefish and permit this winter, or tarpon (ah, tarpon) next spring (if we get to travel again), you should at least consider purchasing a high-end reel, and the Hatch Gen 2 Finatic would be a great one to own. It would serve well for many years, even decades, and you can’t say that about anything you’ll find in the bargain department. So pay now for something you want, or pay over time for an array of reels that may or may not serve well at any given time. And you know how Murphy’s law works—on that day, when you hook a tarpon or an Atlantic salmon or the biggest Skeena steelhead anyone has ever seen, and it takes off to the races, you should expect to see flames and smoke coming off of your reel, just before you hear the dreaded “ping.”

My motto used to be don’t overspend on a reel. But I’ve changed my tune and these days I’m inclined to say, Friends, don’t let friends fish cheap-ass reels.