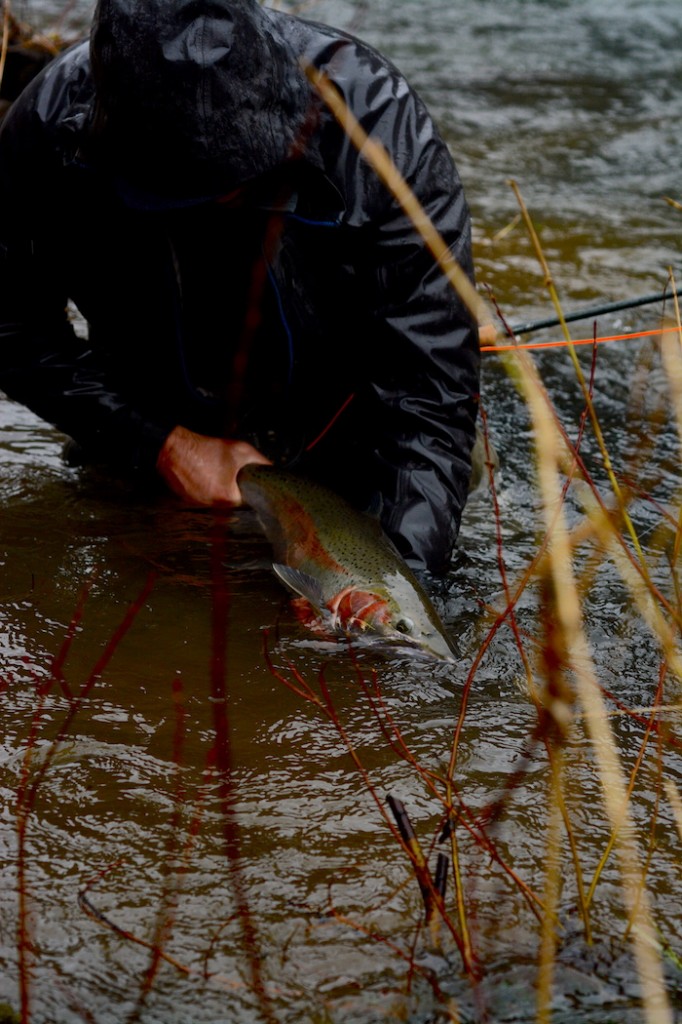 Restricting anglers to the banks, and prohibiting the use of bait on Olympic Peninsula steelhead streams, should allow more fish to reach their spawning grounds.

If you want to see a great example of poor fish and wildlife management, you don’t have to look further than Washington State’s Department of Fish and Wildlife.

The mess started back in 1974 with the historic Boldt Decision, which allocated 50 percent of the annual fishing catch to treaty tribes across the Evergreen State. The results were immediate: on Puget Sound streams, including the Skagit, Stilliguamish, and Skykomish, fish runs took an immediate hit and som
anglers threw in the towel.

As the years passed, coastal steelhead runs continued to decline throughout much of the state, along with Pacific salmon populations and almost everything else you can imagine and eat—ling cod, octopus, sea urchin, sea slugs, clams . . . .

Declining steelhead populations on rivers flowing into Puget Sound, and the restrictive regulations that followed (i.e. full closures on many popular rivers), sent a wave of anglers to the Olympic Peninsula in search of fresh fish. It didn’t help matters that western Washington’s I-5 corridor was seeing a massive population explosion at this time. And a newfound interest in spey rods and that style of fishing brought additional pressure to the mix.

It wasn’t just fly-fishers putting pressure on an increasingly dwindling resource; gear anglers were part of the mix, too, and lethally effective in their methods—gear guys fishing steelhead typically do so from a boat, back trolling divers under cut banks and obstructions, or casting their rigs from the boat, covering any piece of water they wanted. Essentially, when anglers fish from a boat, no steelhead is safe.

Due to the continued deterioration of fish runs on Washington’s Olympic Peninsula, and increased pressure on the resource, WDFW has banned fishing from boats on many Peninsula waters, including the Hoh, Bogachiel, Calawah, Sol Duc, and Queets rivers, among many others. Outcry from gear anglers was immediate and somewhat understandable.

Beginning tomorrow, December 14, all anglers will need to fish from the bank, which will allow some steelhead to swim upstream unimpeded to their spawning grounds. This should be good for the fishery—although not an end all solution to declining steelhead abundance. It’s going to be an interesting study on human behavior because these regulations put a lot anglers with different mindsets all in the same place. And, I have to imagine that anglers will be staking out their favorite runs in the middle of the night, or well before dawn, hoping to be the first to get a crack at those fish. Undoubtably, there will be confrontations. Low-holing might take on epic proportions.

The new regulations are as follows:

— Fishing from a floating device is prohibited.

— Selective gear rules are in effect prohibiting the use of bait (including scents or scented materials), except only one single-point barbless hook is allowed.

Anglers aren’t the only ones taking a hit. Tribal governments are also expected to reduce fishing times and wild steelhead harvest to facilitate a recovery.

Again, this is not a solution to the problem of declining steelhead abundance, but it is a move in the right direction. Things change. Fishing from a boat was fun for many, including myself before I took up fly fishing. But we can’t catch every fish swimming up these rivers. It’s not good for the resource. C&R mortality is real. Hopefully this is the first step in some sort of big change that might change the trajectory that wild steelhead are on, that being extinction.

That’s not an option in my mind. Fishing from the bank certainly is.

This entry was posted in Conservation, Culture, Northwest, Spey, Washington. Bookmark the permalink.