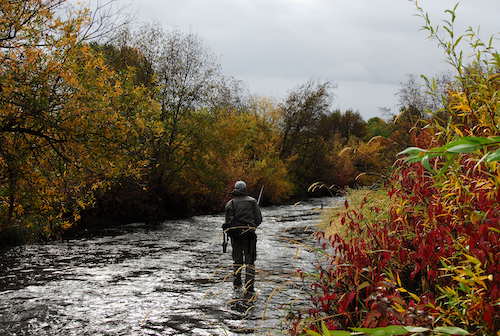 That time of year in the northern Rockies. We’re going from drizzling rain and low clouds to snow tomorrow. The Rocky Mountain Front is getting dumped on today and probably tomorrow, too. I don’t anticipate this snow melting away completely, so the fishing landscape is going to change big time in the next 24 to 48 hours.

I never like seeing summer fade away. And early fall is the best time of the year, so it’s somewhat depressing to see that, and the leaves, go. But mid-to late fall is cool, too. You can have a lot of water in the Rocky Mountains to yourself, and don’t think that overnight freezing temperatures and snow means bugs and the dry-fly game are out of the question. You’ll still see some October caddis and definitely blue-wing olives and midges.  And you know that the streamer game is on right now and will be so for the foreseeable future. Eggs. Yea, eggs do it too. So don’t pack it up yet—if you do so, you’ll miss out on some fine fishing.

So where to fish? The Madison River is a good choice. Lots of eager browns around, all pissy toward each other and not willing to let a streamer pass by without, at least, a glance. Some brutes to be had. Fish that upper river and look for trout in the 16 to 24-inch class. On any given cast you could hook something bigger than that. 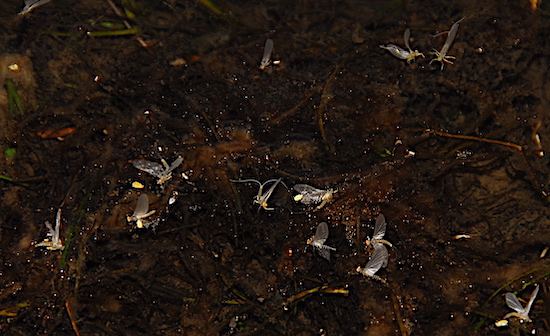 If you see this little bad boys on the water you know the dry fly fishing should be good. Look for Baetis/blue-wing olives between 11a.m. and 5 p.m. Bring a soft rod and light tippet for this action. When you want to throw a stream, pick up the fast action five or a six-weight.

I love the Big Hole River, too. Word on the street is that it’s fishing a little slow, but you know that can change from day to day. Always love casting streamers on the Big Hole because it’s former fish biologist, Dick Oswald, told me you could hook a 20-pound brown or rainbow trout on any give cast. The reason? Some of the Big Hole’s female rainbow and brown trout are sterile. They don’t go through the rigors of spawning and simply continue eating like gluttonous pigs. They get big—again, 30-inch fish are possible.

Rock Creek in western Montana always is fun. Great time to nymph up some browns and bows. You’ll get native cutthroats, too. You can drive the road alongside the river for 60 miles. Stop and pop when you choose. See a good run, try it. Better yet, if you see the river winding away from the road for ways, follow it up and fish fresh water.

The Bitterroot and Clark Fork rivers are great late fall dry fly water. Those caddis and blue-beings steelhead the show. Hecuba could be about, too. It’s been a while since I’ve spent much time on either river, but the fish I’m seeing from friends are sizable.

Regarding those rivers, it’s not too late to throw for northern pike. All the backwaters and sloughs hold fish and they are pretty eager to hit the big streamers. Six, seven and eight weight rods in effect. Couple years ago I got a 20-pounder doing just that. There are bigger fish to be had. If you want to travel a little farther, you could hit the lower Flathead River and cast for pike and smallmouth. Good time for smallies. 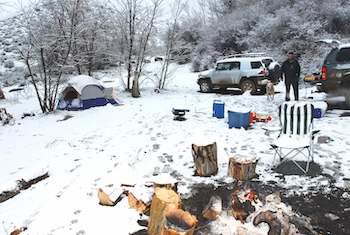 Nobody said it would be warm. Have some firewood. Brew some coffee. Wader up and sit in the truck for a half hour with the heater blasting, before you hit the water. You’ll be ok.

November 30 is the day Montana’s small streams close. Don’t wait for them to ice up. Good time to catch some spawn brook trout that are all colored up. Take the camera, share some pics. I’m probably testing gear in the rain today on a little creek near my house. Holds brook trout and cuttbows. Should be some photos for all you to look at soon.