Army Corps Denies Permit for Pebble Mine. Alaska’s Bristol Bay May Be Saved 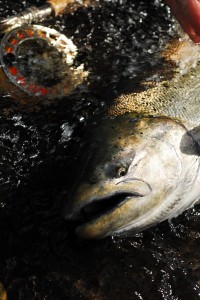 It’s not over, but the edge in Alaska’s Pebble Mine controversy has definitely swung toward the side of common sense. Today, the Trump administration shifted its stance on Pebble Mine and delayed a key permit that’s essential to the mine’s future.

The Corps of Engineers, which last month said the mine would have no “measurable effect” on Bristol Bay’s fish runs and that the agency would issue a permit for the mine, now says the Pebble Mine project will not be allowed as currently proposed, as it would be in violation of the Clean Water Act.

To build the mine, Pebble Limited Partnership would have to demonstrate how it would limit damage to more than 2,800 acres of wetlands, 130 miles of streams, and 130 miles of open water in the Koktuli River watershed. With a green light from the Corps, the Pebble Limited Partnership would have been in operation for at least 20 years, spanned 13 miles, required the construction of a 270-megawatt power plant, a natural gas pipeline, 82 miles of double-lane roads, addition infrastructure, and the dredging for a port at Iliamna Bay. All in pristine wildlife and fish habitat.

Pebble Limited Partnership says the project is not dead, that they expected this outcome, and are prepared to submit a plan for offsetting the mine’s impacts, within weeks.

Chris Wood, head of Trout Unlimited, said it will be difficult of the company to prove their actions won’t hurt the Bristol Bay ecosystem, which includes the largest run of salmon on the planet.

A final record of decision should be known within several weeks.

This entry was posted in Alaska, Conservation, Northwest, Uncategorized. Bookmark the permalink.