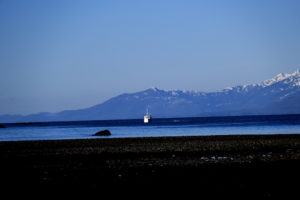 The Hawkeye II on anchor in Southeast Alaska with the jet skiff returning to its side.

Back in April I flew from Missoula to Petersburg, Alaska—my old stomping grounds and the place I was born—and climbed aboard the mothership, the Hawkeye II. The idea was to cruise a portion of the Inside Passage with Thanks Alaska, stopping to prospect remote wild Southeast Alaska steelhead streams just about wherever we pleased.

I wasn’t knew to this deal—back in the day I took a semester off of college and cruised around the area in an 18-foot long open skiff, hiking up streams, camping next to their banks and on some days just purely raking in the steelhead. In Southeast, steelhead average about eight-to 12 pounds, but one day years ago, in an absolute downpour, I managed to get one that stretched 42-inches long. It may have weighed 22 to 25 pounds. Still my personal best.

I wasn’t expecting to repeat that catch on this trip, nor was I disappointed that I’d be sleeping in a comfortable berth on the Hawkeye II, rather than grinding it out, with one ear open for bears, in a small tent in the rain. Funny thing happened on our trip, however. In nine days I didn’t see or feel one raindrop. It was an amazing string of weather that allowed us to focus on the scenery—towering mountains and a vast temperate rainforest—and the steelhead. 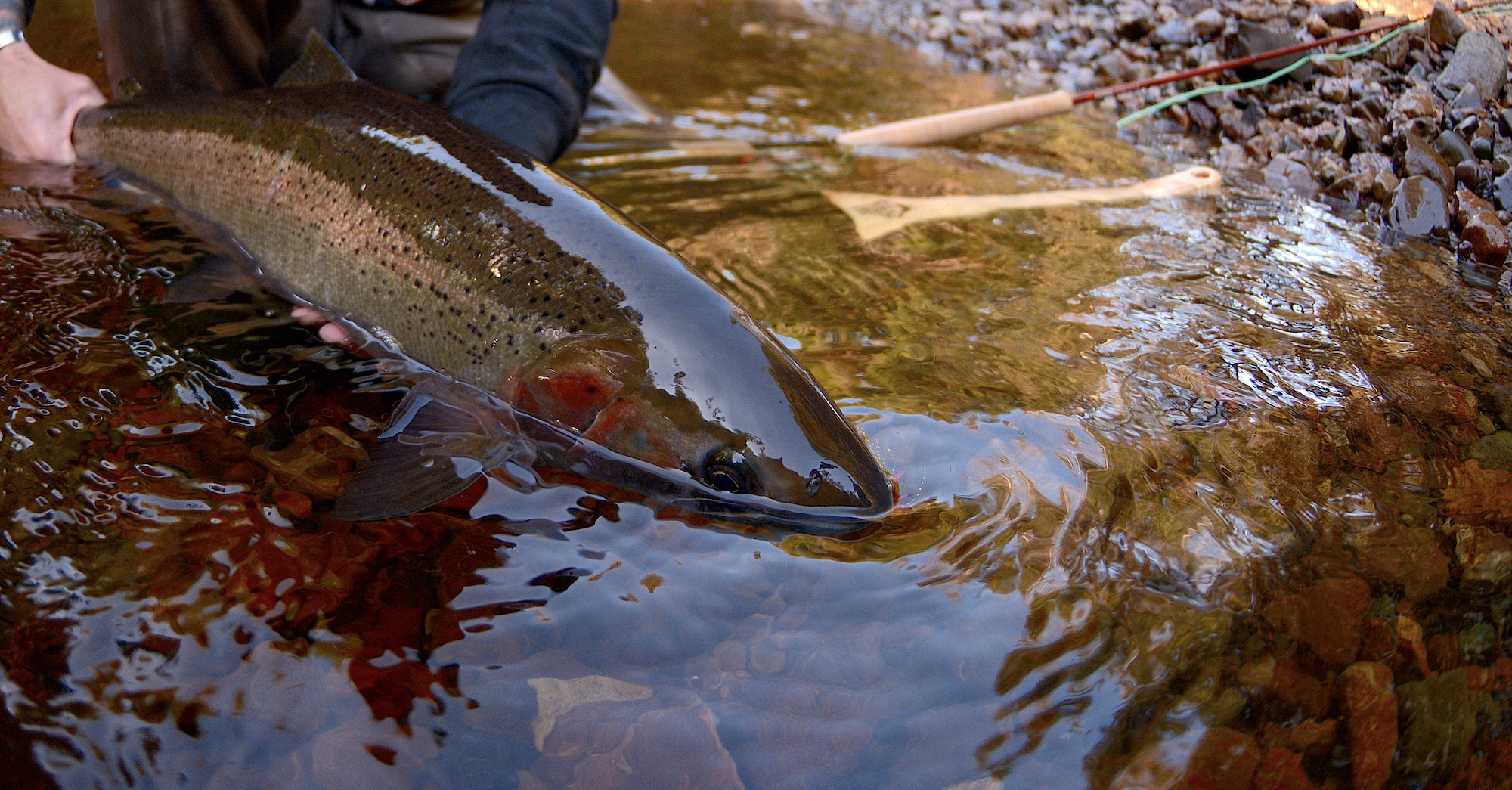 The Hawkeye II is a 68-foot Willard fiberglass vessel with three staterooms (each with bathroom), a full kitchen, a lounge for chillin out and dining, a pilothouse, a rear deck for fishing and, maybe most important, two skiffs that can be hoisted off the top of the ship and launched on the water. Climb into the jet skiff and you are off to the races, running up a wild river where you may be the only person to fish for steelhead, at any time, that year. Remote is the key word here. You’ll see no lil Corky’s, no tippet packages, no tippet, no snelled hooks, no lost strike indicators, no beer cans . . . no nothing. Just rainforest, tannin-stained rivers and completely wild fish.

Our timing was perfect weather-wise, but the fishing was a bit slow—the steelhead hadn’t really poured into the rivers yet, and the sea-run cutthroat and dolly varden were still somewhere out to sea. But we managed several steelhead between us, the largest weighing maybe 14 or 15 pounds, all perfectly wild fish that likely had never seen another fly. 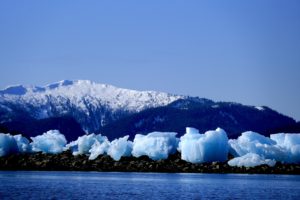 Icebergs deposited on the beach at high tide near Petersburg, Alaska.

We wandered through the Tongas National Forest, the “lungs of North America”, and considered what could be lost if protections for the Tongass are not reinstated. Many of the forest’s most critical salmon and steelhead habitat are left unprotected. Fortunately, a couple groups, including America’s Salmon Forest and Trout Unlimited, have identified 77 critical areas that must have protection to ensure a future for Southeast’s wild salmon and steelhead.

During our trip we cruised past or fished no fewer than 13 of these areas and I can tell you it would be a shame to see them cut to the bone, leaving only a thin natural corridor next to these streams. Logging was rampant in Southeast in the past and caused massive damage to the entire ecosystem. To see the same mistakes committed today would be tragic at best. 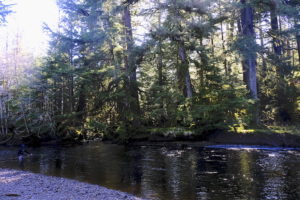 After several days of cruising on the Hawkeye II, I know this—I want to go back to Petersburg, climb aboard again, and spend another blissful week watching some of the worlds finest scenery glide by. The steelhead run from March through late May and in a typical year, there would be sea-run cutthroat and dollies to catch too. All can be taken on the swing, and all are perfectly wild fish. If you’re interested in the Hawkeye II and Thanks Alaska call Gil’s Fly Fishing International at 406-317-1062.

This entry was posted in Alaska, Northwest, Spey and tagged Hawkeye II, southeast Alaska, Thanks Alaska. Bookmark the permalink.