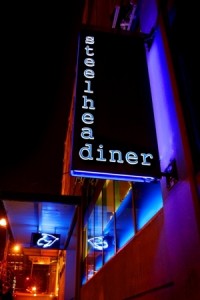 Every once in a while I feel like a really, really lucky guy. And that was the case in July when I went to the Dean River in British Columbia. But prior to the trip I was already feeling lucky. Why? For one, because I actually made a flight from Bozeman to Seattle after breaking down on my way to the airport. And second, because Andrew Bennett, owner of Deneki Outdoors, hosted me and the other guys headed with us to the Dean, for dinner at the Steelhead Diner.

The Steelhead Diner is located in Seattle at Pike’s Place market, which is one of the coolest areas of Seattle. It is upscale, yo, with a wall of windows offering a great view of adjacent businesses and all the action at Pike Place. Also, there’s a view of Puget Sound and the Olympic Mountains. The decor says fly fishing. 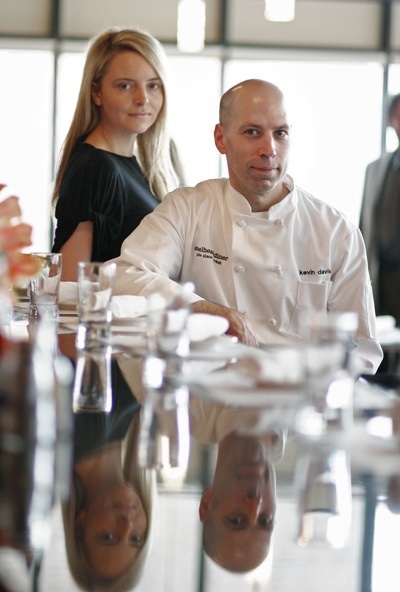 There are lots of flies located above the tables that are contained in glass and labled with the pattern name and tyer. And there are some noteworthy names to be seen. In addition, a private back room hosts some symbolic, historic photos of steelhead and steelhead anglers. And, in one corner, there’s a photo of owner Kevin Davis with a beaming smile and a hefty, fly-caught steelhead from the Dean River. If that wasn’t something to get all of us excited about the trip, I don’t know what would do it. Maybe Davis personally visiting our table a few times that night, making sure we were being taken care of properly while telling tales of his Dean River adventure. You could see a glossed over dreamy look in his eyes and it wasn’t from the wine —he was working. You could tell it was from reflection, from images in his head reminding him of a special week in life.

I think that Dean River steelhead was Davis’ fist and he’s been hooked ever since. Word has it that Davis spent a couple years on the Stilliguamish casting flies for steelhead and never got an eat. That’s when Bennett took pitty and hauled Davis’ ass to the Dean. Apparently Davis stood in one run almost the entire time he was on the Dean and ended up taking that beautiful chromer. It should be noted, Davis is a guy who cares about fish, only serving sustainable species and he wouldn’t touch a wild steelhead if some gillnetter dropped if off, free of charge, at his door. Even if it were a 30-pounder. Fly fishing is a small business and many of us are friends. I think it makes sense for us to support each other and Davis is no exception—cool dude, dedicated to the sport and conservation, serves some of the best food in

Seattle. Why wouldn’t you. Special occasion? Call him. You’ll be well taken care of.

You don’t even have to eat at the Steelhead Diner, but I don’t know why you wouldn’t. I mean, you could just sit around the bar and watch the kitchen work and judge the merit of some of Seattle’s best talent that passes in and out the door. But the food is off-the-charts good and you’ll feel awfully jealous if you don’t get some eats. We sampled a lot of it. Here are some of the dishes that we shared before the main meal arrived:

Then, with multiple bottles of great wine we had:

Can’t remember the desert except to say we were gluttons.

Nex time I visit which will be soon, I’m going to test out the Pike Kilt Lifer Fish and Chips and the Alaska Razor Clam Chowder.

Want to see the full menu or book a night at Steelhead? Check it out here:www.steelheaddiner.com And let Davis know you’re an angler.