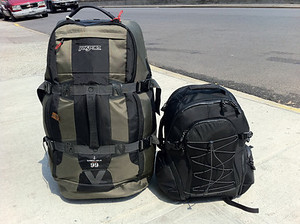 As I travel more often, and live in a smallish house, I’m finding that less may be more. But a guy who truly knows that is a Gary Arndt, who I met in San Francisco last April. He sold his house in Minneapolis and has been kicking it across the world and blogging about it for five years. He lives out of two bags and survives better than most of us. For all of us gearheads, who think we need everything to get by on a three-day weekend, let alone a two-week death march to some hinterland like Russia, this might be an eye-opener and a manifesto on how to pack for your next adventure.

From Gary Arndt’s  Everything Everywhere.com

Despite 5 years of traveling around the world I think I am still fundamentally the same person I was before I started traveling. I’m kind of a smart ass and a bit cantankerous. There hasn’t been any sort of spiritual epiphany which has lead to a brand new Gary. That being said, my attitude towards some things have changed. In particular, my attitude towards stuff. Before I started traveling, you could say I lived a good life. I had a nice house on a lake outside of Minneapolis. It was 3,000 ft² (278 m²) and had all the stuff that a 20-30 something bachelor would want: I had a bitchin READ MORE

This entry was posted in Travel and tagged Everything Everywhere.com, Gary Arndt traveler. Bookmark the permalink.