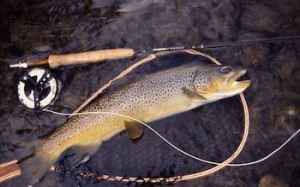 When I lived in Sun Valley, for six years in the mid-1990s and the early 2000s, I used to wander down to the Big Wood River below Magic Reservoir and fish for rising rainbows and streamer-chowing browns. We caught some nice rainbows and couple browns that stretched to 24 or 25 inches, all in a very cool desert canyon setting. So, the report you’re about to read is a real bummer, as the Big Wood Canal Co. is set to rip up the fishery once again. And, apparently, to fish the river now would be not safe. So give this a read before you head for the lower Big Wood anytime soon.

From THE IDAHO MOUNTAIN EXPRESS—Anglers attempting to fish the popular waters of the Big Wood River canyon below Magic Reservoir this week were likely confronted with an unpleasant surprise. Instead of a peaceful, calm river, they were confronted with unseasonal high waters.

River conditions changed rapidly Monday when the Big Wood Canal Co., which owns irrigation water stored in the reservoir, began releasing water from the dam so repairs could be made at the hydroelectric plant.

Megargle said Wednesday that the release started slowly but “flows are going to be considerably higher.”

“There’s going to be a lot of water coming out quickly,” he said, explaining that the canal company intends to reduce the reservoir level by about a third within about 10 days.

Scott Boettger, executive director of the Wood River Land Trust, which has been working with the canal company to maintain stream flows below the reservoir, said the sudden release of water will have a drastic effect on what has become a popular and “phenomenal” fishery for READ MORE