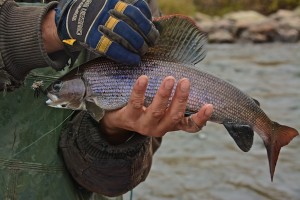 Montana’s Big Hole River is probably my favorite, for too many reasons to list here. However, I will offer a couple: first, it offers the opportunity to catch a mega brown or rainbow trout on any given cast, it seems like the epicenter of a great drink, the Moscow Mule, and, especially on its upper end, anglers can catch native grayling.

But the grayling’s hold in the Big Hole is tenuous, has been for a long time. The river gets irrigation water drawn from it during summer and water temperatures often exceed the limits for grayling.  Some ranchers are trying to keep water in the river to benefit grayling and keep those fish off the endangered species list. But conservationists say the rancher’s efforts aren’t enough and they just sued the US Fish & Wildlife Service to prove that point. The USFS made a decision in August that basically supported the efforts of ranchers and said that more water in the river should ensure the survival of grayling. But the Center For Biological Diversity doesn’t agree.

So what rests ahead? My guess is more lawsuits and the continuation of a fish on the brink. Grayling need cold water and the Big Hole isn’t really providing that. A listing on the ESA would change things, but until I see that fish on the list with my own eyes, I won’t believe it will ever happen.

Want to catch Big Hole grayling? Fish the upper river with small nymphs and dries. Fish near the tributary mouths during spring. During summer, leave them alone if water temperatures are elevated. During fall, look for grayling rising to olives, galore.