It may have felt like spring around Montana yesterday, and it looks like we’ll see temperatures in the 50s by the coming weekend, but it’s still winter and the fish know it. I’ve heard good reports of late from the Madison, Rock Creek, the Bitterroot, and the Bighorn, and there’s no reason to think that that trend won’t continue on those streams and many others into the foreseeable future. That means, if you aren’t out there with your stick right now you are missing some of the best fishing of the year.

It’s true that winter trout can be taken on dry flies, often when they rise to midges or the freak early Baetis emergence, but the bulk of the fish are taken underneath, most often on two-fly rigs. This isn’t rocket science but I thought I would share a couple of  my favorite two-fly setups with you here.

For trout, I typically use 4X and 5X tippet material and add that to the end of a store-bought leader or leader that I tie myself that tapers to 4X. I’ll usually run about six to eight feet of leader off my floating line and to the end of that I’ll attach about two or three feet of 4X tippet material. To that I’ll tie on one of these patterns: either an egg imitation, a San Juan Worm, or a small stonefly nymph, such as a brown Pat’s rubber-leg stone. To the eye of that fly I’ll tie on a 16-inch section of 5X tippet material. To the end of the 5X material I’ll tie on a standard flashback pheasant-tail nymph or a three-dollar dip, not a bead head version of the PT. I go without the bead head because I’m not a big fan of catching whitefish during winter and they are always eager to hit flashy nymphs, which is also the reason why the lightening bug doesn’t see so much play in my winter fishing arsenal these days.

After I get my tippet and flies right I estimate how deep the water is that I’ll be fishing, and I add in what the current speed appears to be. I am a guy who likes to get down when fishing nymphs, so I go with the low and slow approach. I like my flies to bounce along the bottom and when they start to hang up I just raise the rod tip slightly so that the flies and lead (I’ll get to the lead equation in a moment) continue their drift.

Regarding lead, I like to use split shot and I attach these about six or seven inches above the lead fly. Again, depending on water conditions I may go with one or two split shot or even more, up to five or six if needed, to get those flies down. Very ugly for sure. Equally effective.

For a long time, especially when I was fishing almost ever day and was in amazing tune with the nuances of water and flies, I refused to fish a strike indicator when dead-drifting nymphs. I think I caught at least as many and possibly more fish than most people and I thought the tactic really helped me understand and read water. But I’m not opposed to using strike indicators and I do it often—however, I do think that that I miss more fish when using an indicator than those time when I fish without one. The choice is yours. If you do choose to use an indicator you should be ready to adjust that bobber each time you change positions, meaning from one run or pool to another. Always gauge the depth and current speed and adjust the bobber to a place where you think the split shot and flies will drift  just inches above the bottom. Remember, when fishing trout during winter you want a dead drift. Try the patterns I’ve mentioned, make sure you are getting near bottom with your flies and don’t cry when you snag up and loose your setup, whether that’s on the first or one-hundreth cast with your rig. When fishing during winter, if I’m not losing some flies I don’t feel like I’m really fishing. Good luck out there. Let me know how you do. 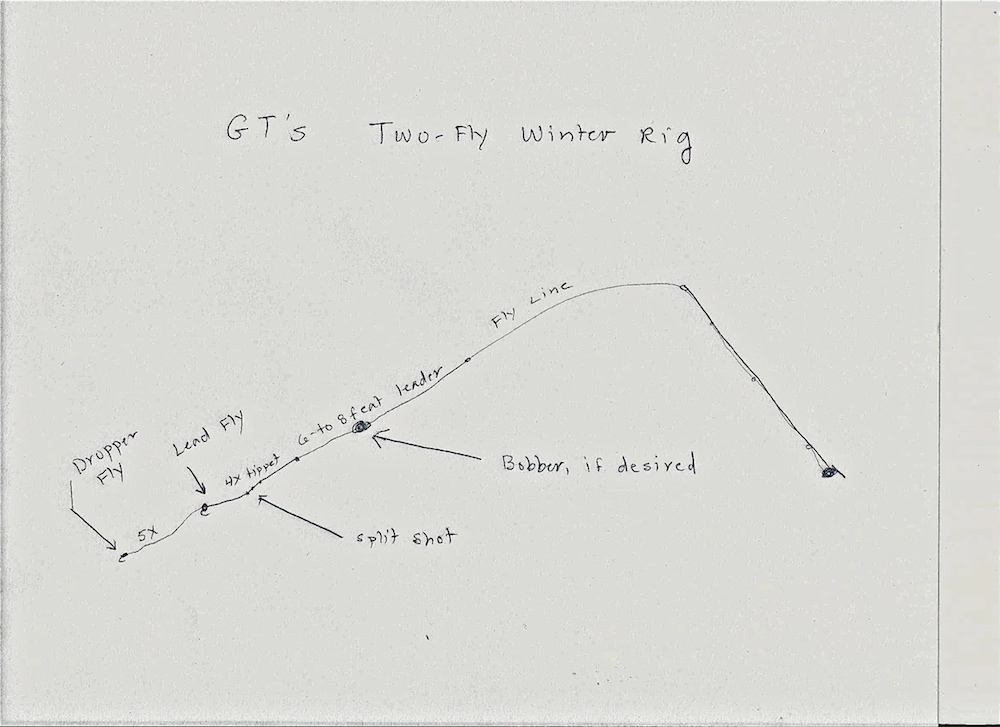