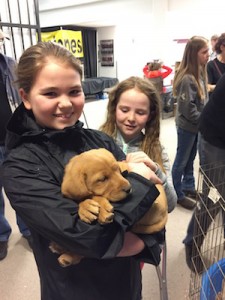 I went to the Great Rockies Sport Show in Missoula a few weeks ago and I didn’t stand a chance—both of my daughters were in tow and the show allowed a vender to sell Labrador puppies right next to the front door. You couldn’t get into the show without seeing those dogs and that at least double the time it took me to get in and out of there. Truth told, I bet we spent 40 minutes with those dogs before we made it through the doors and onto the show floor.

It was the same story on the way out. Both of the girls begged and pleaded and promised to clean up everything from here on until the day they die, including what those little critters might leave in the backyard on a daily basis. There was a moment when I thought, what the hell, but then I came to my senses and said, “You girls don’t understand. I want one worse than you do, but we have to wait until the right time.” 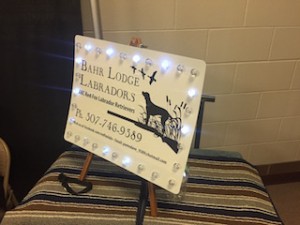 I didn’t go for it, but you may want to. These really were nice looking animals and very mellow.

When is the right time? Probably never. But a guy probably should know what his next job might be before he goes out and buys a Lab. And I should know—I had Labs for 30 straight years, but have 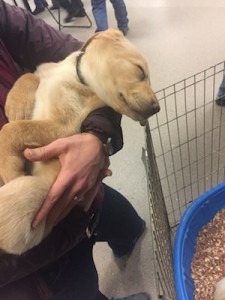 If they do this all the time, except when they are hunting, we’ll take three.

been Labless for the past seven or so. Do you know what those creatures do to a house before they turn two or three years old? No sock, shoe or toilet paper roll is safe. 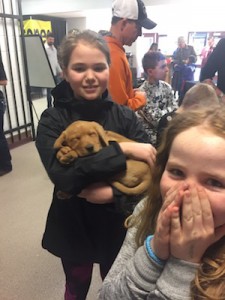 The answer is still no.

I dodged the bullet on those dogs and was the “bad guy” for at least a day or two, but the girls got to pet and play with those little dudes for more than an hour that day and that’s something. How long can I hold out? Don’t know. Would I get one of these red labs from Wyoming? They were nice animals that’s for sure. But there may be even better ones out there. Research. That’s what I need to do before pulling the trigger. 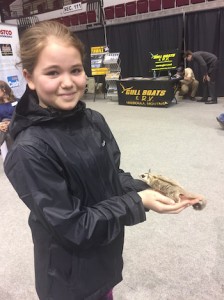 No! You can’t have that thing either, unless we shoot it out of a tree and eat it for dinner. 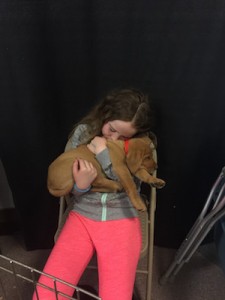 Put that thing down and let’s get out of here before I change my mind.