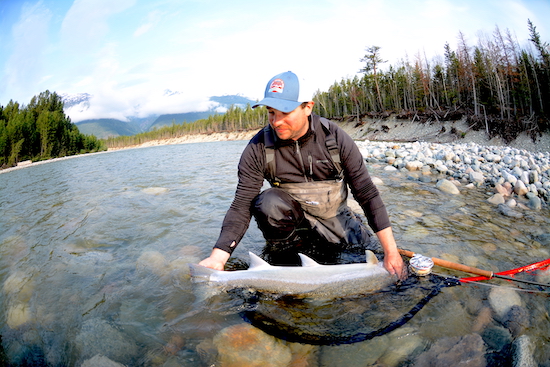 Thought I would share this photo of a wild Dean River steelhead, as inspiration to get out over the weekend, where allowed, cast a line and find a little me time on the water.

That’s what I did last summer, as previously posted . . . I said F’ all to everything going on in life and booked flights to British Columbia on Pacific Coastal Airlines, and then a helicopter ride from Bella Coola to the Dean River.

I bring this up because I finally sank my teeth into writing a story about that experience and worked on it off and on over the past week. I was trying to sum up why its so important to get out of your head and onto the water and how it can really bring life back into perspective. I don’t know if I successfully achieved that message, but that’s what people are going to read in the next issue of American Angler.

Whether I summed it up or not, I do think people will enjoy the read. Big fish, bears, a fish camp full of seasoned anglers who don’t whine, and plenty of wine—and whiskey, gin and beer, of course—makes for an entertaining article. At least, that’s what I like to read. I am not a guy who wants to know how to perfect the bow-and-arrow cast, or other how-to gems. I like to learn on the water, in the hands of friends and sometimes guides, and to discover as I go.

So I’m not the most technically skilled angler on earth. I know where to go and catch enough fish to keep happy. 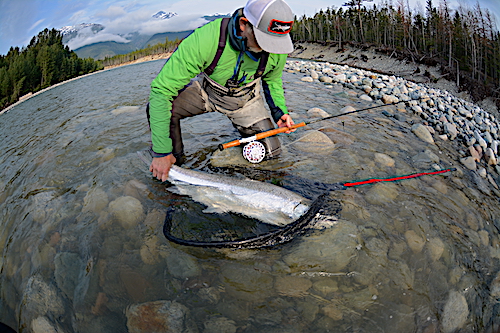 Ok, one more for your viewing pleasure.

Happy. That’s what I was coming off the Dean last year. I had an attitude that the people back home who were giving me hell were the ones who didn’t have a clue. They’d dragged me in and now I was out, the brainwash beatdown done. I’m still riding high on the Dean River experience and only wish I could be there again this year. At this time it doesn’t sound like Canadian lodges, at least in BC, will be open for the whole summer season. But who knows—maybe Trudeau opens up the province, maybe there are cancellations, maybe the fish swarm in and I get another shot. I’m ready if called. Have a great weekend everyday and share some fish pics with me if you can. Oh, and the fish in the photo? Thirty-nine by nineteen, about a mile and half from tidewater, in on the tide and definitely the strongest steelhead I’ve ever fought. A once in a lifer . . . unless I get another shot.

If you want the full scoop on adventure in British Columbia and the Cariboo-Chilcotin region, check out Land Without Limits —GT

This entry was posted in British Columbia, Northwest, Spey. Bookmark the permalink.